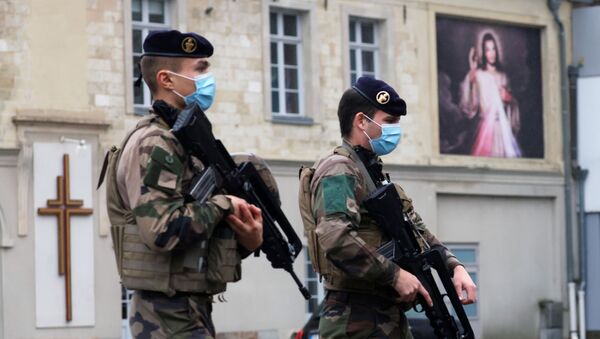 Irina Acheeva
correspondent
All materialsWrite to the author
Tensions are high in France as the question of depicting cartoons of Islamic Prophet Muhammad comes to a head, beginning with the decapitation of teacher Samuel Paty in mid-October for showing the drawings in class.

One of them, aged 29, is suspected of having been in contact with the Tunisian assailant, according to AFP. The other three, aged 23 to 45, were reportedly present at the home of the first suspect.

Six people had already been taken into custody by investigators who are trying to identify the closest associates of the main suspect, a 21-year-old Tunisian, injured during his arrest.

Holy Mass Dedicated to Victims of Nice Attack Held on All Saints' Day
On 29 October, a 21-year-old man from Tunisia, later identified as Brahim Aoussaoui, killed three people with a knife in the Notre Dame Basilica in Nice. Mayor Christian Estrosi said the attacker had repeatedly shouted: "Allahu Akbar" (God is great). The French government has called it a terrorist attack.

After the Nice attack, another assault took place on 31 October in France’s Lyon, where a 52-year-old Greek Orthodox priest, Nikolaos Kakavelaki, was shot and injured in the city's 7th district near a Greek church.

Since mid-October, France has been gripped by horror as the Islamic threat has increased following the brutal decapitation of French history teacher Samuel Paty by a radicalised teenager.