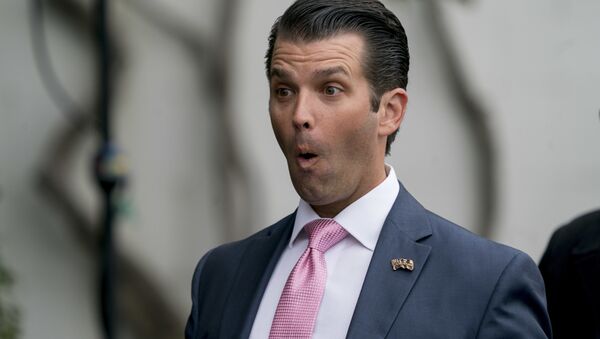 James Tweedie
All materialsWrite to the author
At an election rally on Monday, US President Donald Trump took aim at big tech and media companies, which he accused of suppressing criticism of Democratic Party candidate Joe Biden and his son Hunter, who has been alleged to have peddled his father's influence to foreign business.

Facebook insiders have claimed that the social media giant could have 'shadow-banned' US President Donald Trump's son, Donald Jr., and other family members during the election campaign.

But the corporation, which owns photo-posting site Instagram and mobile phone chat app WhatsApp, held back for fear of being accused of a political bias, the Washington Post reported on Monday.

The story shines light on how social media sites hide posts from some users from the rest of the online community, a practice dubbed 'shadow-banning', 'stealth-banning' or 'comment-ghosting'.

They claimed those "strikes" were removed, as were some against the social media accounts of other Trump family members, many of whom have been actively campaigning for the president's re-election.

Facebook spokeswoman Andrea Vallone appeared to deny claims of leniency against pro-Trump accounts, insisting that "many" of them “have been penalized for repeatedly sharing misinformation in the past three months.” But she did not specify what sanctions, if any, had been applied.

“We don’t disclose the details of these thresholds publicly for very real concerns about gaming the system, but we do send notifications to groups, pages, accounts and advertisers when they’ve received a strike and are receiving reduced distribution, and when they are a repeat offender," Vallone said.

The company is “responsible for how we apply enforcement, and as a matter of diligence, we will not apply a penalty in rare cases when the rating was not appropriate or warranted under the program’s established guidelines,” she added.

"We don't have freedom of the press," Trump asserted. "We have suppression by the press."

​Trump and Republican Senators have vowed action against social media firms over the suppression of that story and bans of other conservative user accounts.

DEA Seized Second Laptop of Hunter Biden in February - Report
In mid-October the Federal Communications Commission (FCC) launched proceedings, long threatened by Trump, to strip social media sites of their 'Section 230' protections. Those privileges protect sites and internet service providers against legal action for defamatory or criminal material published by users, on the basis that they are not edited publications but open platforms.