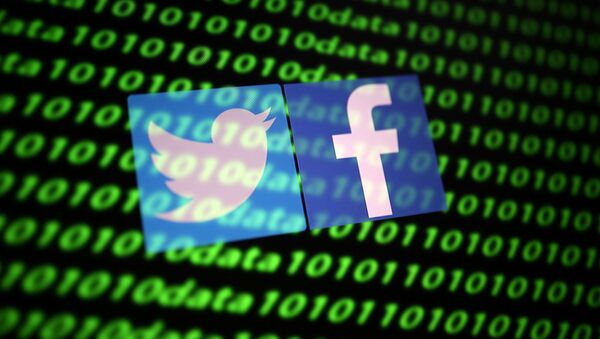 Aleksandra Serebriakova
Moscow-based Sputnik correspondent specializing in foreign affairs.
All materialsWrite to the author
The US Supreme Court so far has refused a plea from Republicans not to count postal ballots received in Pennsylvania several days after Election Day, a decision that has been met with a wave of condemnation from officials who consider this practice as fraudulent.

Just a night before Election Day, Twitter again flagged the post of US President Donald Trump, this time in relation to voting in Pennsylvania, with a “misleading” content warning, and Facebook attached a “voter fraud” explainer to the publication.

The move, initially greenlighted by Pennsylvania Supreme Court, was slammed by state Republicans who issued a plea against the legislation. However, the petition was rejected by the Supreme Court 4-4 ruling last month. Trump’s nominee Associate Justice Amy Coney Barrett, who joined the court last week, was expected to weigh in on the argument. However, she refused to take part in the case, citing lack of time “to review the parties’ filings fully”.

This means that all ballots postmarked on the Election Day and received until 6 November would still be counted towards the final vote in Pennsylvania, the state which is as a key battleground for the incumbent president and his Democrat opponent Joe Biden with 20 election votes at stake.

Trump was not happy with the court’s ruling.

“The Supreme Court decision on voting in Pennsylvania is a VERY dangerous one”, he wrote on Twitter and Facebook.

“It will allow rampant and unchecked cheating and will undermine our entire systems of laws. It will also induce violence in the streets. Something must be done!”, the President added.

The tweet was soon hidden from his feed and replaced with the following warning: “Some or all of the content shared in this Tweet is disputed and might be misleading about an election or other civic process'. 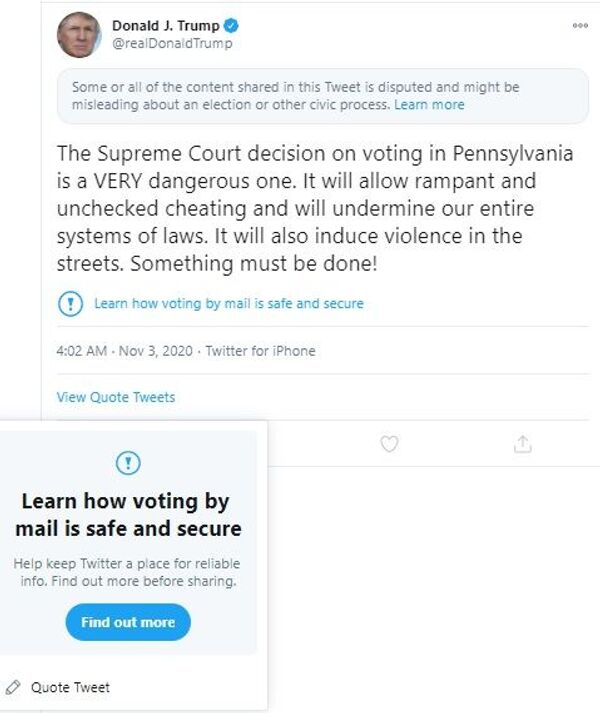 The President’s post cannot be liked or shared now and can be viewed only if the user clicks on the label. The quote option is still available for users but they are offered to “learn how voting by mail is safe and secure” before sharing the post.

Facebook also used some kind of censorship of the President’s statement and attached a “both voting by mail and voting in person have a long history of trustworthiness in the US” explanation attached to the post.

This comes as both Twitter and Facebook were harshly criticised for limiting access to a story in the New York Post about Joe Biden’s alleged participation in his son’s business dealings in Ukraine and China. The Post’s claims were based on the content from the laptop said to have belonged to Hunter Biden and left by him at a repair store back in April 2019.

Twitter initially censored the story, insisting that it had violated its “hacked materials” policies, and Facebook maintained that it had to be verified by its independent fact-checkers. After the article went viral, Twitter allowed its users to share the report.