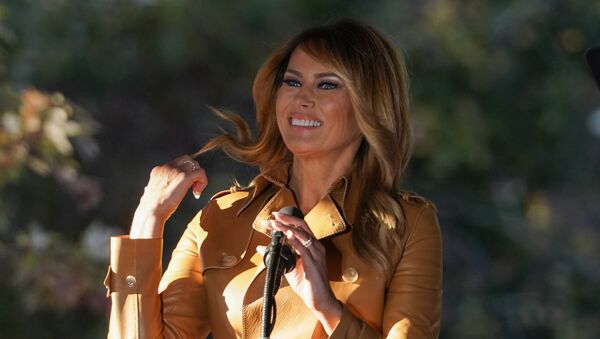 Svetlana Ekimenko
All materialsWrite to the author
Melania Trump’s speech on Monday was similar to three she gave over the previous week, including one in Wisconsin on 31 October, where she accused her husband’s rival in the presidential elections, Democratic nominee Joe Biden, of hiding "in a basement".

US First Lady Melania Trump slammed Joe Biden as a "career politician" seeking to push a "leftist agenda" as she appeared with a solo speech at her husband’s campaign event in North Carolina on 2 November.

"When you vote tomorrow, you are choosing between a Washington outsider who will continue to do all he can to improve our country, a president with [an] America First agenda and proven results… Or, you can choose Joe Biden -- a career politician of over four decades, with no results," said the First Lady.

The FLOTUS went on to claim that President Donald Trump sees the future of America as "bright," while his Democratic opponent Joe Biden sees only a “dark winter”.

Melania Trump emphasised that Biden sought to "pack the Supreme Court to protect a radical leftist agenda," while hailing her husband as a man who "upholds and defends" the US justice system.

“When rioters and looters were burning our cities and wrecking small businesses that belong to hard working families and bring jobs to our communities, where were the Democrats?” the First Lady asked the crowd at Magnolia Woods in Huntersville, a suburb of Charlotte.

​Melania Trump denounced the Democrats and the media for wielding the coronavirus pandemic as a "politically charged, polarizing" tool.

"The Democrats, together with the media, have attempted to make COVID-19 the most politically charged, polarising and divisive topic of the last decade," said Trump.

In a shot aimed at the Democrats, she deplored the "intolerance” that her husband's supporters face in the US.

“Because of acts of intolerance and even violence, honest and hardworking Americans are sometimes afraid to put Trump signs in their yards… Members of our White House staff have been thrown out of restaurants just for serving their country. Even big tech companies are now politically censoring us. All this from the supposedly tolerant left. But like my husband, we cannot and we will not give up.”

“We’ve had three and a half years of winning. Let’s have another four.”

Melania Trump had sprinted to make up for her marked absence on her husband’s campaign trail, as she delivered four speeches over the past week.

Earlier, the First Lady hit the campaign trial for the first time since 2019, accompanied by Former White House counsellor Kellyanne Conway, to appear in battleground Pennsylvania on 27 October. 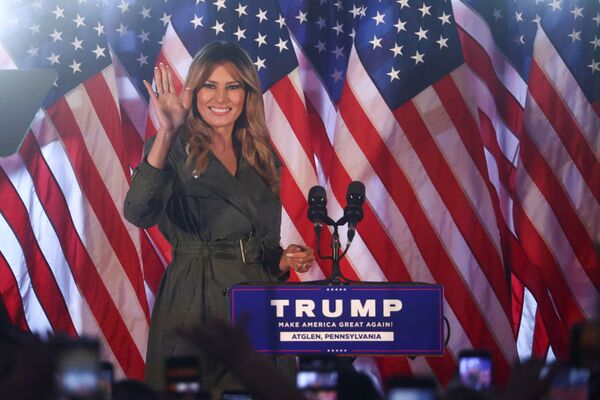 Melania Trump then proceeded to attack Democratic presidential nominee Joe Biden and his running mate, Sen. Kamala Harris (D-Calif.), at a rally in West Bend, Wisconsin, where she accused the Democrats of working with the media to “attack the administration” over its response to the coronavirus pandemic.

“When you hide in a basement, you feel safe communicating your wishful thinking.”

Her remarks came after she put in an appearance alongside President Trump at his campaign rally in Tampa, Florida, on Thursday.

Prior to her first solo appearance at a Trump rally in 2020, the FLOTUS had been noticeably absent from the campaign rally circuit since last summer, due to the coronavirus pandemic and more recently, when she and her husband, Donald Trump, tested positive for COVID-19 on 2 October.

The First Lady is also known for her reluctance to make speeches at mass rallies. Nevertheless, Melania Trump appeared with the president at the annual White House Halloween celebrations she organised on Sunday night. 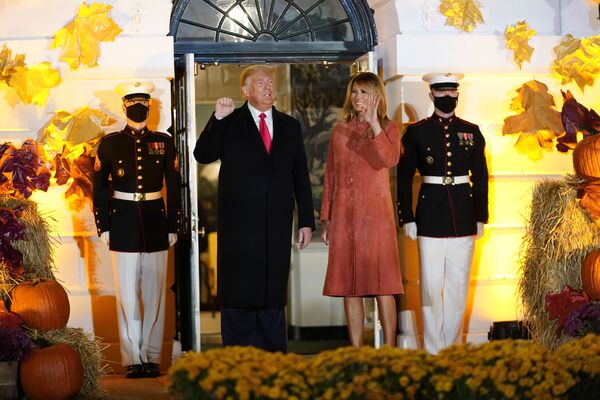 Melania Trump was also present at the White House when Justice Amy Coney Barrett took the oath of office to be Associate Justice of the Supreme Court, while earlier, in September and October, she put in an appearance at the two campaign debates with the rest of the Trump family.