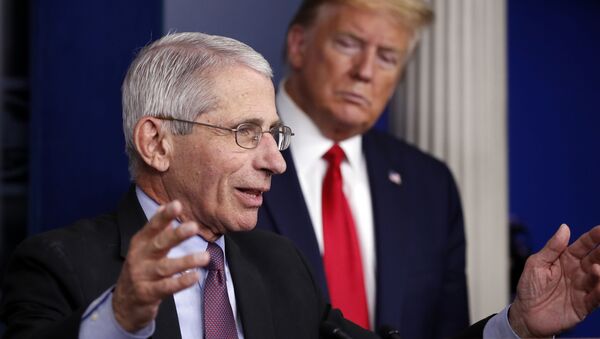 Asya Geydarova
Editor
All materialsWrite to the author
This time, Fauci, who has been known as an outspoken critic of the Trump administration's handling of the pandemic, also accused Trump's coronavirus adviser Scott Atlas of incompetence.

The White House has slammed top US public health official, Dr Anthony Fauci, saying that instead of proposing a change in coronavirus strategy, Fauci chose to "play politics" by expressing his political sympathies, apparently referring to his praise of Democratic presidential candidate Joe Biden.

In a statement issued on Sunday, White House spokesman Judd Deere has called Fauci's recent comments concerning the administration "unacceptable and breaking with all norms".

"Dr. Fauci has a duty to express concerns or push for a change in strategy, but he’s not done that, instead choosing to criticize the President in the media and make his political leanings known by praising the President’s opponent," @JuddPDeere45 in statement. pic.twitter.com/X5SC9hC3vX

In an interview published on Friday, Fauci expressed concerns about the coronavirus situation in the United States, issuing a gloomy forecast for the winter season. "We're in for a whole lot of hurt", he said, "You could not possibly be positioned more poorly."

Fauci also said that Biden's campaign "is taking it seriously from a public health perspective", compared to that of the Trump administration, and criticised pandemic adviser Scott Atlas, saying he has "real problems with that guy".

Fauci added that he has not had any conversations with the US president since the latter was treated for COVID-19 at Walter Reed Medical Center.