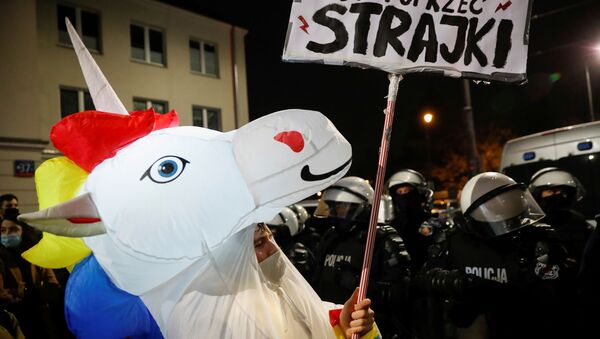 Igor Kuznetsov
All materials
The Swedish Green Party wants to offer free, subsidised, and safe abortions in Sweden to Polish women in response to the Catholic country's tough abortion laws.

In response to the proposed tightening of Poland's abortion laws, Swedish Minister for Gender Equality Åsa Lindhagen has welcome Polish women come to Sweden on an abortion trip.

"Let Polish women have an abortion in Sweden!", Åsa Lindhagen thundered on Instagram against the proposed legislation, drawing historic parallels and calling for Sweden to reciprocate.

"It is time for Sweden to stand up for Polish women in the same way that Poland once stood up for us! In the 1960s, when abortion was banned in Sweden, thousands of Swedish women travelled to Poland where abortion was legal", Lindhagen wrote.

She emphasised that her Green Party, part of the ruling bloc, wants Sweden to offer Polish women free, subsidised, and safe abortions in Sweden.

During the postwar era, abortion was illegal in Sweden, and many Swedish women travelled to Communist Poland to undergo this procedure. The phenomenon was so popular that it even coined the phrase "abort trip" which is still present in the Swedish language. As the number of illegal abortions reached tens of thousands per year, they were condemned by the Social Democrats as a disgrace. Abortion was legalised in Sweden in 1974. In subsequent decades, Sweden's stance on family, gender, and reproduction issues has become increasingly liberal.

By contrast, Poland has after the breakup of the Eastern bloc gradually made access to abortion increasingly difficult in a country strongly influenced by Roman Catholicism. As of October 2020, abortion in Poland is only legal in cases of rape and incest, when the woman's life or health is at risk, or when the foetus is irreparably damaged.

On 22 October 2020, however, Poland's Constitutional Tribunal declared the law authorising abortions for malformed foetuses to be unconstitutional, effectively banning most of the small number of official abortions carried out in Poland. This unleashed rallies in dozens of Polish cities in front of town halls, churches, and the ruling Law and Justice (PiS) party. Demonstrations of solidarity were held in other European nations, including Sweden, where hundreds gathered outside of the Polish Embassy in Stockholm.