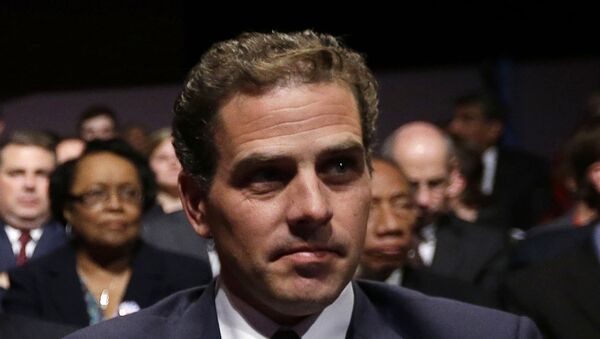 © AP Photo / Pablo Martinez Monsivais
Subscribe
Max Gorbachev
All materialsWrite to the author
On 14 October, the New York Post published a story alleging that Joe Biden was involved in his son’s business dealing in Ukraine and China. The newspaper cited the contents of Hunter’s laptop, which the second son of Joe Biden reportedly took to an IT store in April 2019 to get repaired. The New York Post claims he never returned to collect it.

New details have emerged about the contents of Hunter Biden’s laptop, as the son of former US Vice President and Democratic presidential candidate Joe Biden has been criticised for the lack of security on his MacBook Pro. According to the Mail on Sunday, the businessman’s laptop contained private emails of his father, including emails sent when Joe Biden served as vice president of the United States and the phone numbers of almost every member of the Barack Obama administration. The password for the laptop was "Hunter02".

The newspaper wrote that cyber experts hired to assess the materials downloaded from Hunter’s computer had confirmed its authenticity.

"I have been doing this for 20 years and there is nothing to suggest the laptop or its contents have been interfered with or altered in any way", an expert, who has worked with US law enforcement agencies, told the newspaper.

Hunter’s handling of top secret data on his laptop was branded a "national security nightmare" by another IT expert, who spoke with the Mail on Sunday.

None of the information discovered on the computer was encrypted or protected by two-step verification. The contents of the laptop also include:

Threat to Himself and Others

IT experts have criticised Hunter for keeping secret and sensitive information on his laptop without encryption or protection.

Chris Greany, an IT expert who has advised several UK foreign secretaries on laptop security, said the lack of security was "staggering". He noted that this posed danger not only to the reputation of Hunter Biden and his family, but could have made him a victim of blackmail if someone had accessed the laptop.

One email discovered on the computer contains the names and contacts of members of the US Secret Service during his father's tenure as vice president. An unnamed source told the Mail on Sunday that keeping such information unprotected is "a flagrant breach of security" and that Biden’s handling of this information could have threatened other people’s lives.

"If a hostile state or individual had managed to hack into Hunter's computer – and it wouldn't have been difficult considering the lack of security on it – they would have easily found out who was guarding the Vice President and potentially been able to threaten family members of those Secret Service members", the source told the newspaper.

The news comes 48 hours before Americans cast their ballots in the presidential election and could potentially thwart Joe Biden’s chances of securing a victory. The 77-year-old Democrat previously dismissed the report by the New York Post, which said that the information discovered on Hunter Biden’s laptop revealed that Joe Biden was involved in his son’s business dealings in China and Ukraine. However, neither the former vice president nor his son has questioned that the laptop was taken to an IT store or the authenticity of other information found on it.

000000
Popular comments
TallDarkHandsome, What is the name of the video/computer game that you have been playing?

What, me worry
1 November 2020, 23:06 GMT1
000000
Surely , Hunter is allowed to us a laptop , who doesn't use a laptop these days . So he knows a few phone numbers , isn't that enlightening ? This investigation reveals nothing and has become a waste of time .