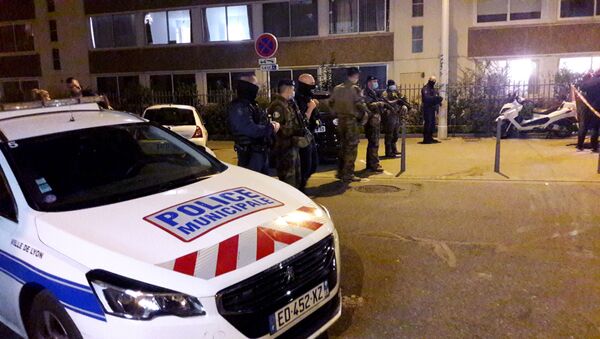 On Saturday, Charles Michel wrote in a tweet that freedom of conscience in Europe must be respected.

"We condemn this new heinous act in Lyon. All our thoughts for the priest who is between life and death. In Europe freedom of conscience is guaranteed for all and must be respected, violence is intolerable and condemnable," Charles Michel wrote on Twitter.

​David Sassoli issued a similar statement via Twitter, stressing that Europe will stand firm against violence and terrorism.

"We are shocked and saddened by another brutal attack in Lyon. All our thoughts are with the victim who is fighting for his life. Europe will never bow to violence and terrorism. We will always defend freedom of conscience," Sassoli said.

​The Turkish Foreign Ministry issued a statement on Saturday condemning the Lyon attack and wishing a swift recovery to the victim. According to the statement, Turkey has been fighting against various forms of terrorism for years and stands in solidarity with the French people and the Orthodox community in France.

On Saturday, an attacker armed with a hunting rifle with a sawed-off barrel wounded a Greek Orthodox priest in Lyon and then fled the scene of the shooting.

The priest, identified as 52-year-old Nikolaos Kakavelaki, was shot in the 7th district of Lyon near a Greek church on Saturday afternoon. He is now in serious condition at the hospital, according to France 24.

Lyon Mayor Gregory Doucet told reporters on Saturday that the motives behind the attack remain unknown. Lyon public prosecutor's office said it had opened an investigation for attempted murder.

French Police Stifle Clashes Between Armenian, Turkish Communities Near Lyon, Reports Say
Lyon’s public prosecutor, Nicolas Jacquet, announced late on Saturday that a suspect had been arrested as part of the investigation into the attack.

On Thursday, a 21-year-old man from Tunisia killed three people in a knife attack in the Notre-Dame de Nice Basilica. The French government has designated it a terrorist attack.

The Lyon and Nice attacks occurred as France is experiencing national unease in the wake of an increasing Islamic threat following the brutal murder of French history teacher Samuel Paty by a radicalized teenager in mid-October.

On October 21, Macron delivered a speech during a commemoration ceremony for Samuel Paty. The president urged to "free Islam in France from the foreign influence and strengthen control on the mosques' funding," and stressed that France would continue to defend freedom of expression and step up its battle against radical Islam.

In response to these comments from Macron, Erdogan said that the French president disrespected millions of French Muslim citizens and "needed mental treatment." He added that the "manifestation of hostility to Islam means hostility to Turkey."

Macron said later on Twitter that "we will not give in, ever," adding, nonetheless, that France respected "all differences in a spirit of peace" but hate speech was unacceptable.

Turkey has been joined by other Muslim countries in condemnation of Macron's recent comments on radical Islam.