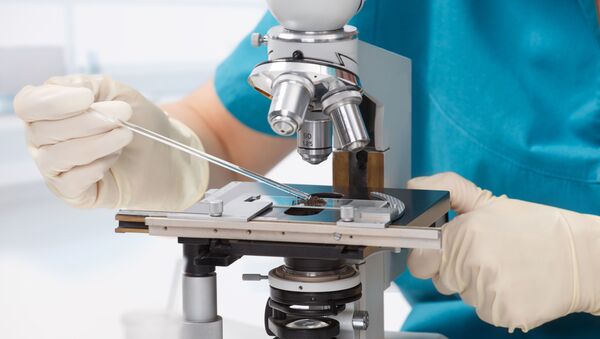 Max Gorbachev
All materialsWrite to the author
Female readers can breathe a sigh of relief as it appears the illness only affects men, who have only one X chromosome. Scientists posit that the additional X chromosome in women protects a certain gene from mutation.

Scientists from the US National Institutes of Health (NIH) have discovered a deadly new genetic disease, with researchers saying that in the United States alone hundreds of people or even more suffer from it. The new illness is called vacuoles, E1 enzyme, X-linked, autoinflammatory and somatic syndrome or VEXAS. According to the findings of a study published on 27 October in the New England Journal of Medicine, the inflammatory disease causes "symptoms that included blood clots in veins, recurrent fevers, abnormalities in lungs and vacuoles (unusual cavity-like structures) in myeloid cells".

When inflammation affects blood vessels, the disease can damage vital organs. So far, 10 out of 25 people who have had VEXAS died from the disease.

"These patients are really sick. They don't respond to any treatments, from high doses of steroids to various chemotherapies. It's incredibly frustrating for those patients, and frightening for their families", Dr Dan Kastner, a senior author of the article and scientific director of the Intramural Research Program at the NIH's National Human Genome Research Institute told NBC.

According to the study, VEXAS doesn’t appear until adulthood and is thought to only affect men.

Treatments of the genetic disease can include bone marrow transplantation and gene editing.

Researchers from the National Institutes of Health used a bizarre approach in their study. Normally doctors identify diseases and disorders by looking at symptoms. NIH scientists worked backward. They studied the genes of 2,500 people.

"We had many patients with undiagnosed inflammatory conditions who were coming to the NIH Clinical Center, and we were just unable to diagnose them. That’s when we had the idea of doing it the opposite way. Instead of starting with symptoms, start with a list of genes. Then, study the genomes of undiagnosed individuals and see where it takes us", said David B. Beck, M.D., Ph.D., clinical fellow at NHGRI and lead author of the paper.

Scientists found three middle-aged men who had mutations in the gene called UBA1. Later they discovered 22 other men with the same mutation. All of the patients had the same symptoms that were mentioned earlier, like blood clots, recurring fevers, etc.

Since the publication of the study, researchers have discovered another 25 people suffering from VEXAS, which brings the known total to 50, but scientists suspect that the real number is much higher, especially in the United States where, according to the National Center for Biotechnology Information, 125 million people suffer from some form of chronic inflammatory disease.

"I would guess that in the United States that there are at least hundreds of patients with this disease and maybe even a lot more than that", said Dr. Kastner said.

The Other Side of the Story

Despite the grim news, scientists and doctors hailed the discovery of the new disease, which they say will accelerate progress in medicine.

"This fascinating discovery is of immediate importance to rheumatologists and has far-reaching consequences of general clinical interest", Dr Ephrat Levy-Lahad and and Mary-Claire King, researchers who weren't involved in the study, wrote in an accompanying editorial.

First, the new study can help people who have been suffering from different symptoms for years which doctors have failed to diagnose. Scientists say for these people the news is a game-changer.

Secondly, the use of the "genome-first" approach will enable scientists to discover other diseases as well as new ways to treat existing illnesses.

"We don't always have a diagnosis, so we say, 'Well, let's throw the kitchen sink at the patient'. This [discovery] opens up a whole world of potential therapeutics down the line", Dr. Natalie Azar, an assistant clinical professor of medicine and rheumatology at NYU Langone, told NBC.