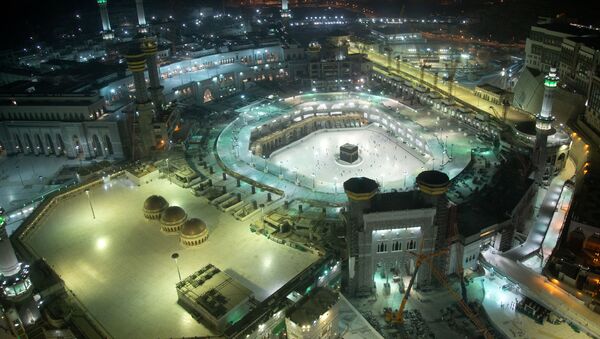 Tim Korso
All materials
No casualties were reported after the incident at the Grand Mosque, which is still limiting the number of pilgrims visiting it daily due to coronavirus restrictions.

A video of a car ramming several barriers and eventually crashing through the southern gates of the Masjid al-Haram, also known as the Grand Mosque of Mecca, has emerged on social media. The footage shows a white car driven by an unknown perpetrator being chased by several people, presumably personnel from the mosque.

Ya Allah!!!!! Wth 😭😭😭😭 who would do such an evil thing! May Allah protect the holy mosques! #SaudiArabia #makkah #Masjidalharam pic.twitter.com/7BtdQbKLUk

After ramming through the gates, the driver appears to manage to exit the car and tries to enter the mosque, built around one of the holiest sites in all of Islam, the Kaaba, but it is unclear if he was successful. There have been no reports of casualties as a result of the ramming, which happened when the number of visitors to the Masjid al-Haram is being limited due to the COVID pandemic.

Security men take the car that hit the doors of the Grand Mosque in Mecca (Masjid-al-Haram), out of the Mosque. #Makkah #Mecca #SaudiArabia pic.twitter.com/uZfQ5Hw10R

The man was eventually apprehended and referred to the public prosecutor to face charges over his actions. Authorities in Mecca did not mention the perpetrator's name or motives, but noted that he had possibly been in an "abnormal condition" at the time of the incident.