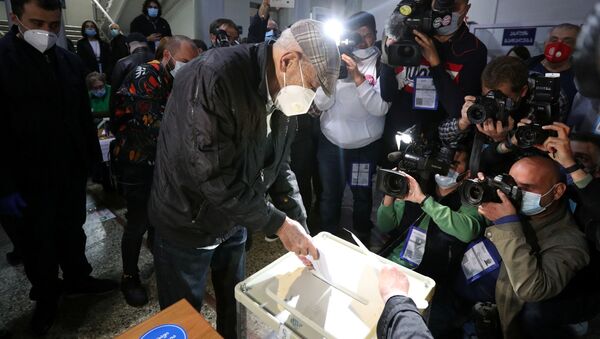 Asya Geydarova
Editor
All materialsWrite to the author
TBILISI (Sputnik) - Georgia's ruling party, Georgian Dream, is leading in the parliamentary election with 54.72 percent of the votes, the Central Election Commission (CEC) said after 28.2 percent of the votes had been counted.

The opposition Strength is in Unity coalition, which includes the former ruling United National Movement (UNM) party, has 24.92 percent of the votes, according to the CEC.

Preliminary results showed earlier that a total of seven parties were making it into parliament: the ruling Georgian Dream, the former ruling United National Movement (UNM), which is part of the Strength is in Unity coalition, European Georgia, the Alliance of Patriots of Georgia, Lelo for Georgia ("Try for Georgia"), the libertarian Girchi party, and Strategy Aghmashenebeli.

The CEC said that a second round of the parliamentary vote needs to be held in 15 out of 30 constituencies. Representatives of the ruling Georgian Dream party and of the Strength is in Unity opposition coalition are expected to participate in the second round.

Following the preliminary results, Georgian Prime Minister Giorgi Gakharia wrote on his Facebook page, "We have won!", adding, however, that there are no official numbers yet.

"We showed the whole world that we are a part of European civilization and we deserve to take our place in the big European family, which we will definitely preserve", Gakharia said.

CEC head Tamar Zhvania told reporters on Saturday evening that the election was held in a calm atmosphere, with the exception of a few cases.

One opposition member of the CEC yelled at the briefing that the results had been fabricated. Zhvania explained that they were only preliminary results and that not all of the votes had been counted yet.

Georgia's TV Pirveli reported that leaders of the opposition parties were planning to hold protests outside the CEC building, contesting the results of the Saturday vote. According to media reports, police were not letting reporters in or near the CEC building late on Saturday.

The Saturday election marked the first time that a mixed system of bloc and first-past-the-post voting was used in Georgia. According to CEC, the voter turnout was 56.11 percent.