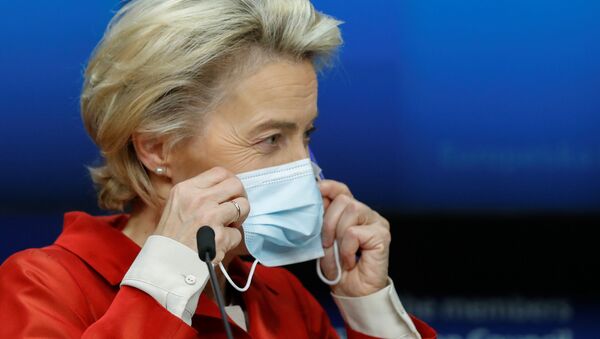 The UK's environment ministry imposed new rules in April to stop the spread of two destructive plant bugs from the continent, Xylella and Ceratocystis. But in June the European Commission issued EU legislation in an attempt to block the move by Britain, who had already left the bloc.

A row has blown up between the UK and the European Union (EU) over bureaucratic red tape on the British side of the Channel.

The European Union (EU) is suing the UK over new controls it imposed in April to stop crop pests being brought in on plant imports, the Daily Express reported on Friday.

The European Commission, led by Germany's Ursula von der Leyen, said it had "decided today to send a letter of formal notice to the United Kingdom for failing to comply with the EU rules" on two species of pests - just two months before the post-Brexit transition period is set to end and those rules no longer apply.

"While the EU has proportionate measures in place to protect plants from those plant pests, the UK protective measures are unjustifiably stricter than EU requirements", the Commission's statement read.

The two bugs targeted by the Department for Environment, Food, and Rural Affairs rules are Xylella fastidiosa, a bacterium that causes leaf scorch and other diseases in a variety of crops and fruit trees, and Ceratocystis platani, a fungus which causes cankers in plane trees - commonly planted along streets and in parks in British cities.

A scientific study earlier this year concluded that Xylella could cause losses of over €20 billion to olive farmers in Spain, Italy, and Greece.

​And Tory Peer Baron Framlingham accused the Commission of trying to "bully" the UK into lowering its higher standards.

EU's Michel Barnier Says Deal With UK 'Within Reach', Opening the Way for Last Minute Trade Talks
He asked if junior minister for Rural Affairs and Biosecurity Lord Gardiner agreed "that it is quite outrageous for the EU Commission to bully us in this way, given the gravity of the situation?"

"Xylella is now present in France, Italy, Spain, and Portugal and on plants that have been traded in Germany and Belgium", Framlingham said. "It will have a devastating effect on our trees and shrubs if we fail to keep it out".

Gardiner explained that the Commission had published legislation in June demanding the UK remove the restrictions, adding: "We disagree with the EU's conclusions".

Prime Minister Boris Johnson's government and the Commission are currently locked in last-ditch talks to strike a trade deal before the transition period ends on 31 December, but on Friday EU negotiator Michel Barnier would only say "much remains to be done".