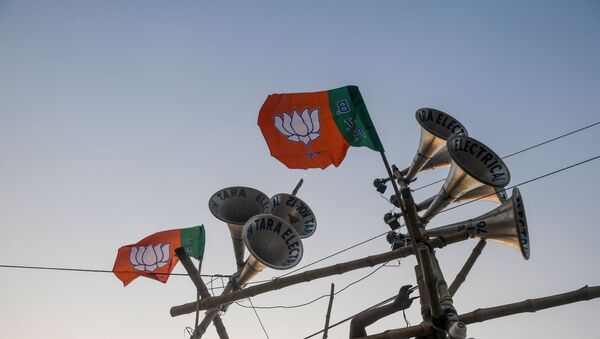 Shweta Sharma
Sputnik correspondent
All materialsWrite to the author
The targeted killing of Bharatiya Janata Party (BJP) workers continues unabated in the restive state of Jammu and Kashmir, a disputed territory claimed by India and Pakistan. Eight party workers, including senior leaders, have been shot dead by terrorists this year.

The Bharatiya Janata Party (BJP), which is gearing up for upcoming elections, has for the first time since the revocation of the semi-autonomous status of Jammu and Kashmir in 2019, condemned the ongoing killings of its workers.

World
Will Terrorist Killings of Party Workers Undermine India's Ruling BJP Ahead of Elections in Kashmir?
On Thursday night, three BJP workers, including a local youth wing leader, were shot dead by terrorists in South Kashmir's Kulgam area, police said. They were travelling in a car when terrorists opened fire.

TRF or The Resistance Front, a new terror group, which has become active in Kashmir since the abrogation of Article 370 in August 2019, has claimed responsibility for the attack.

The political leaders of the ruling party, including Prime Minister Narendra Modi, have condemned the killings, calling them a brutal attack.

"I condemn the killing of 3 of our young Karyakartas. They were bright youngsters doing excellent work in J&K. My thoughts are with their families in this time of grief. May their souls rest in peace", said Modi taking note of the killing for the first time.

What was their fault? Why were they killed?

They were killed because they were working for the welfare of their people.

Killing someone for their work alliance is insane & inhuman. pic.twitter.com/syqlwvaaqW

Speaking to Sputnik, Ravinder Raina, BJP president of the state unit accused "Pakistani terrorists" of being behind the attack, saying those responsible would not be spared.

"The workers in Kulgam, Fida Hussain Yatoo, Umer Rashid Beigh, and Umer Ramzan Hajam attained martyrdom. They have been killed by coward Pakistani terrorists. The cowards will have to pay a heavy price", said Raina who was at the funeral of the party workers.

Huge crowds gathered in Kulgam today at the slain BJP workers' homes to participate in their final farewell. Emotional scenes were witnessed at the funeral as the families paid their last respects.

#Kashmir: Emotional scenes at the home of one of the three #BJP workers killed last night in a suspected militant attack in YK Pora area of southern Kashmir’s Kulgam district. pic.twitter.com/7rxJaCwBso

Senior BJP leader Sofi Yusuf from Kashmir on Friday demanded the resignation of Kulgam's Superintendent of Police, holding the police responsible for not providing security to the workers despite demands to do so, reported Gulistan News. He stated they will lodge a protest by not participating in any political activity.

Regional political leaders Omar Abdullah and Mehbooba Mufti, who have been demanding the restoration of Kashmir's special status, also condemned the killings.

Former chief of the union territory, Mufti stated that the people of Kashmir are giving their lives to the government of India's "ill-thought out policies".

Saddened to hear about the killing of three BJP workers in Kulgam. Condolences to their families. At the end of the day, its people of J&K who pay with their lives because of GOI’s ill thought out policies.

On 8 July, senior party leader in Bandipore, Sheikh Waseem Bari was killed along with his father and brother. On 6 and 9 August, two others were killed in Budgam and Kulgam. On 5 August, Arif Ahmad was injured in an attack.