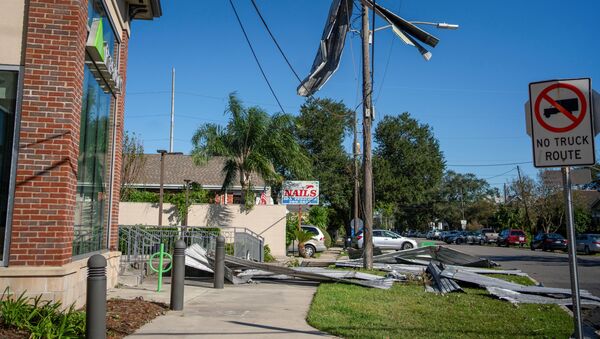 Having initially made landfall as a Category 2 storm, Zeta has since been downgraded to a tropical storm. In a Thursday release, the US National Hurricane Center indicated that the storm still poses a danger to residents, as the cyclone has registered maximum sustained wind speeds of 50 mph, with tropical storm-force winds extending outward some 205 miles.

The center of the storm is near northwestern North Carolina, along the state’s border with Virginia. Moving at a pace of 48 mph, Zeta is forecast to “emerge over the western Atlantic by this evening,” according to the hurricane agency.

However, before Zeta makes its way to the Atlantic, the storm may spark “a tornado or two” in the Carolinas or southern Virginia, on top of the 1 to 3 inches of rain that are due to fall across the central Appalachians, Mid-Atlantic and parts of the Ohio Valley on Thursday.

Although the worst of the storm has passed, many living along the US Gulf Coast have been left with the familiar clean-up task that comes with a hurricane making landfall in the region.

At present, over 2 million people have been left without power as a result of Zeta downing electrical lines. The latest figures released by tracker PowerOutage.US indicate that Oklahoma, Louisiana, Mississippi, Alabama, Georgia and both North and South Carolina have been dealt the brunt of the outages.

At least four people have died in the storm, one of whom was electrocuted by low-hanging power lines in New Orleans, Louisiana. Another man is believed to have died after drowning in Mississippi while filming the storm, according to Weather.com. The Atlanta Journal-Constitution reported that two others died in Georgia when a tree fell onto a home.

“Zeta has left hazards like flooded roads, downed power lines and displaced wildlife in our communities that no one should take lightly,” Louisiana Gov. John Bel Edwards tweeted early Thursday.

“Now is not the time to go sightseeing. Everyone needs to remain vigilant, continue to listen to local officials and be safe.”

Much of the Gulf Coast was left inundated as Zeta swept through the region, leaving dozens of roadways flooded - in fact, coastal Mississippi was subjected to storm surges of up to 9 feet on top of the rain.

With 2020 having seen an overly active hurricane season, Zeta became the 11th named storm to make landfall in the US this year - the most in recorded history. The storm was also the fifth cyclone to make landfall in Louisiana in 2020, following Cristobal, Marco, Laura and Delta.