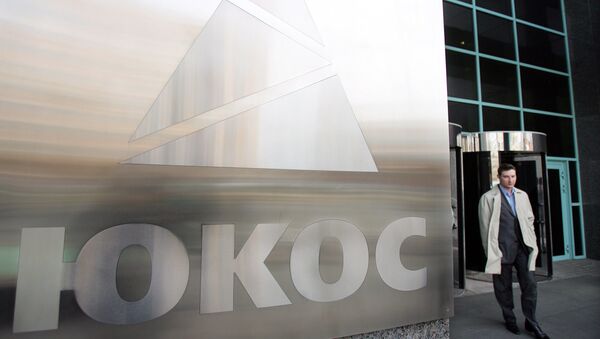 © AFP 2021 / NATALIA KOLESNIKOVA
Subscribe
MOSCOW (Sputnik) - Russia asked the Supreme Court of the Netherlands to suspend the enforcement of rulings on lawsuits by ex-shareholders of the Yukos oil company, hearings are scheduled for 30 October, the Russian representative at the European Court of Human Rights (ECHR), Deputy Justice Minister Mikhail Galperin told Sputnik.

In June, the Dutch Supreme Court ruled admissible Russia's cassation appeal against the decision of the Hague Court of Appeal to recover $57 billion in favour of the former Yukos shareholders.

"On 30 October, hearings in the Supreme Court of the Netherlands will take place on the application of the Russian Federation to suspend the enforcement of arbitration rulings on lawsuits by former Yukos shareholders", Galperin said.

Initially, the arbitration court ruled to recover $50 billion from Russia, but the district court of the Hague overturned the decision in April 2016. Last February, however, the Hague Court of Appeal again sided with the shareholders. With account for penalties, the amount increased to $57 billion, Russia said.

Russian officials said that the court of the appeal had overlooked multiple instances of the plaintiffs breaking anti-corruption laws. According to the Justice Ministry, the former shareholders obtained the company's assets via conspiring, organising fictional auctions, and bribing officials, the ministry said.