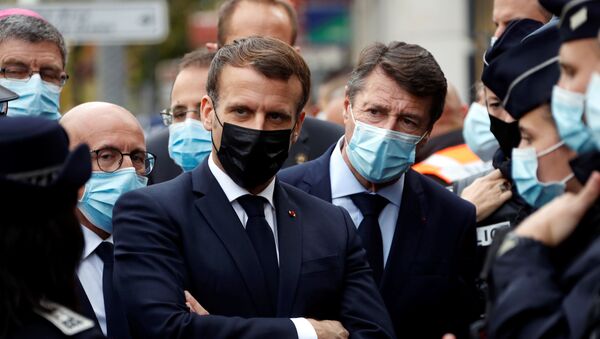 Aleksandra Serebriakova
Moscow-based Sputnik correspondent specializing in foreign affairs.
All materialsWrite to the author
On Thursday morning, Nice witnessed a knifing rampage that led to at least three deaths. One woman is believed to have been beheaded in the basilica in the center of the city.

French President Emmanuel Macron said France has been "under terrorist attack again" after a fatal stabbing in Nice.

Speaking to reporters in Nice, the president said that France was attacked because of "our values... of freedom and our desire not to yield to terror", according to a passage translated by Reuters.

France "will not give up on our values" because of "Islamist terrorist attack", he added. 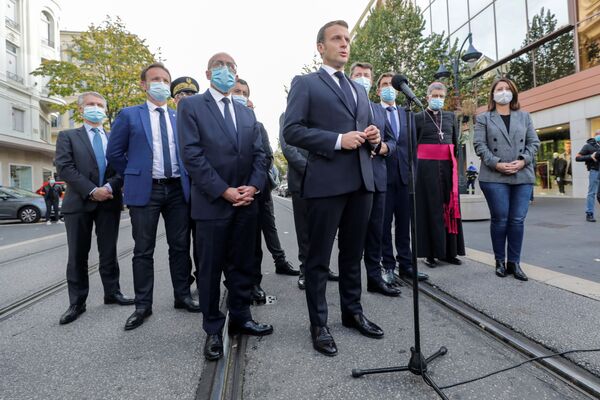 French President Emmanuel Macron speaks to the media during the visit to the scene of a knife attack at Notre Dame church in Nice, France October 29, 2020
© REUTERS / ERIC GAILLARD

Macron arrived to the city on Thursday, after a morning attack at and near Notre Dame Basilica, which is located in Avenue Jean Medecin. The assault was carried out by a knife-wielding man, who was later apprehended by police and is now believed to be in hospital. Three people were reported dead following the attack, including a 70-year-old woman - said to have been beheaded inside the church - and the church warden.

According to the Nice-Matin newspaper, the attacker was a 21-year-old man with Tunisian citizenship. During the assault, he was reportedly heard shouting "Allahu Akbar".

The mayor of Nice, Christian Estrosi, said on Twitter that everything "leads us to think" now that “this was a terror attack". France’s anti-terrorist body has opened up an investigation into the killing "linked to a terrorist organisation”.

Hours after the Nice attack, police reportedly killed an armed man in Montfavet, near French city of Avignon, who was also heard crying "Allahu Akbar" while waving a gun.

Macron announced that France will now step up the deployment of soldiers protecting key sites in the country, including schools and places of worship. The number of soldiers will now be more than doubled from 3,000 to 7,000, the president added.

The attack came less than two weeks after the teacher Samuel Paty was beheaded in a Parisian suburb after showing his pupils cartoons of the prophet Muhammad - which had appeared in the satirical magazine Charlie Hebdo in 2015 - during a class about freedom of speech.

Cartoon depictions of the prophet Muhammad is often considered blasphemous by Muslims. The publication of cartoons had led to a deadly shooting in Charlie Hebdo's office back in 2015, which left 12 people dead and 11 injured. 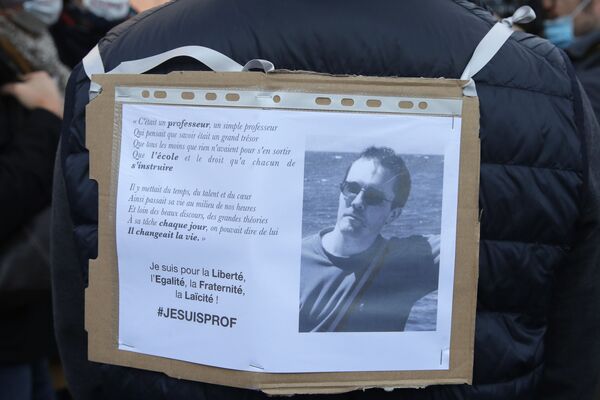 A demonstrator displays on his back a portrait of slain teacher Samuel Paty during a demonstration Sunday Oct. 18, 2020 in Paris
© AP Photo / Michel Euler

Paty's murder has now been treated as a terrorism attack, as President Macron defended the teacher's right to display the images and called him a "quiet hero".

He also said that Islam was "in crisis" around the world and announced a plan to reform the religion as practised in France, a statement that has earned him widespread condemnation throughout the Muslim world, including from Turkey's President Recep Tayyip Erdogan, who argued that the Macron needed to undergo "mental checks".