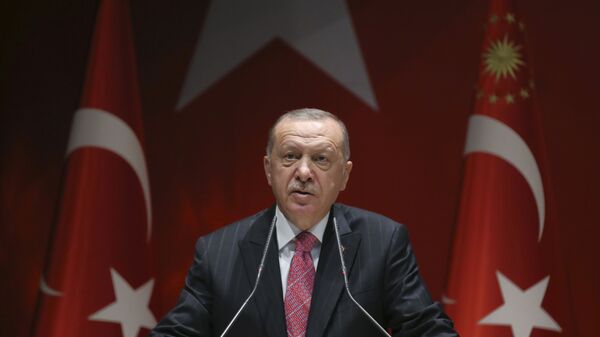 © AP Photo / Turkish Presidency
Subscribe
Svetlana Ekimenko
All materialsWrite to the author
A fresh edition of the French satirical magazine Charlie Hebdo features a caricature depicting Recep Tayyip Erdogan in an inappropriate situation, feeding into recent tensions between France and Turkey after comments made by President Emmanuel Macron on radical Islam following the death of teacher Samuel Paty at the hands of a radicalised teen.

Turkey will seek to take appropriate legal and diplomatic steps in response to a caricature of President Tayyip Erdogan published in the French satirical weekly Charlie Hebdo, Turkey's Communications Directorate said on Wednesday.

"Our people should have no doubt that all necessary legal and diplomatic steps will be taken against the caricature in question. Our battle against these rude, ill-intentioned and insulting steps will continue until the end with reason but determination," stated the directorate.

State media reported that Turkish prosecutors had also launched an investigation into Charlie Hebdo's executives over their actions.

The caricature featuring Turkey’s President Tayyip Erdogan published in the French satirical weekly on Wednesday was earlier slammed by Turkish officials as a "disgusting effort" to "spread its cultural racism and hatred".

Presidential spokesman Ibrahim Kalin went on Twitter to condemn the publication of the caricature as showing “no respect for any belief, sacredness and values".

"They are just showing their own vulgarity and immorality. An attack on personal rights is not humour and freedom of expression," he said.

French President Macron’s anti-Muslim agenda is bearing fruit! Charlie Hebdo just published a series of so-called cartoons full of despicable images purportedly of our President. We condemn this most disgusting effort by this publication to spread its cultural racism and hatred.

​On Tuesday, French satirical magazine Charlie Hebdo unveiled the cover of its Wednesday edition, which featured a caricature depicting Turkish President Recep Tayyip Erdogan seated in an armchair half-dressed, with a canned drink in his hand.

​The character in the caricature is also shown lifting the dress of a woman wearing an Islamic hijab, suggested as having given him the drink, exposing her naked rear.

The accompanying caption reads: "Erdogan is very playful in his private life."

The satirical magazine previously published cartoons depicting the prophet Mohammad, considered blasphemous by Muslims. In 2015, two Muslim terrorists broke into the magazine's office and opened fire, killing 12 and injuring 11 others.

The current developments feed into the recently escalating row between Turkey and France sparked by comments made by French President Emmanuel Macron on radical Islam following the death of teacher Samuel Paty at the hands of a radicalised teen. 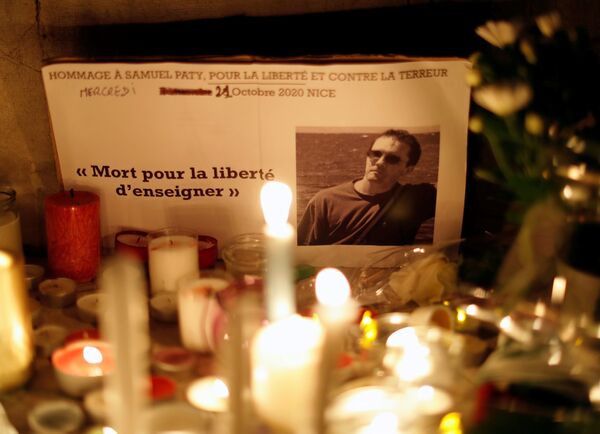 Candles are lit at a makeshift memorial as people gather to pay homage to Samuel Paty, the French teacher who was beheaded on the streets of the Paris suburb of Conflans-Sainte-Honorine, as part of a national tribute, in Nice, France, October 21, 2020
© REUTERS / ERIC GAILLARD

In a speech delivered by French President Emmanuel Macron on 21 October during a commemoration ceremony for Paty, murdered on 16 October after he had displayed caricatures depicting the Islamic prophet Muhammad to his students, Macron called for people to “free Islam in France from the foreign influence”.

Pronouncing Islam to be a religion “in crisis” worldwide, he also added that the country would continue to defend freedom of expression, pledging new legislation in France, including stricter oversight of schooling and control over foreign funding of mosques. 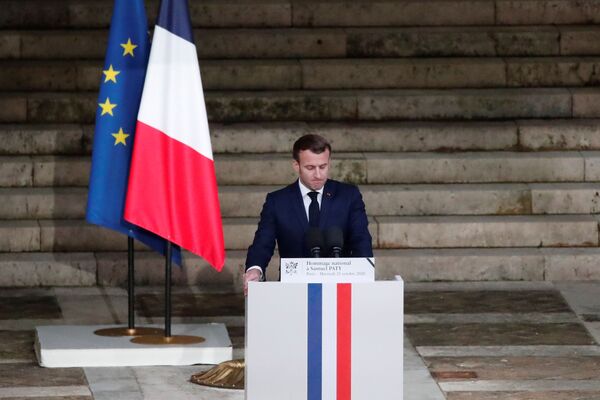 Recep Tayyip Erdogan weighed in on the statements by Macron, saying the French president disrespected millions of French Muslim citizens.

In an address on 23 October Erdogan said: "What else can one say about a head of state who treats millions of members from different faith groups this way: first of all, have a mental check.”

The statement prompted France to recall its ambassador from Ankara due to “unacceptable” comments by the Turkish president.

000000
Popular comments
Observation Post, I suppose if it had been Trump lifting up the skirt everyone would laugh.
CalDre
28 October 2020, 13:55 GMT2
000000
Not necessarily sticking up for Erdogan but this is one of many reasons to dislike the french.