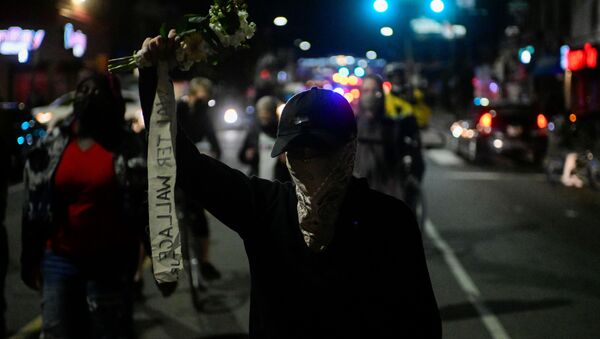 Asya Geydarova
Editor
All materialsWrite to the author
The protests started on Monday following the fatal shooting of a black citizen, and quickly grew into riots, with vandalism, looting, and clashes with police forces, which resulted in some 30 officers injured, according to local media reports.

Mass riots have continued in Philadelphia after a video went viral on Monday that showed 27-year-old Walter Wallace being fatally shot by two police officers after he did not obey orders to back away and drop a knife.

A lawyer representing Wallace's family said he had bipolar disorder.

Pennsylvania Governor Tom Wolf said in a statement on Wednesday that he and the mayor of Philadelphia are in close contact to ensure that violence in the city is minimized as much as possible in the ongoing riots.

"My administration has been in constant contact with the Mayor's office, and will be ready to assist with requests, when they are made, to keep the focus on our deep-seeded challenges, and avoid unnecessary harm to businesses that provide services to affected neighborhoods," Wolf said.

On Monday, mass riots broke out in Philadelphia after police officers fatally shot Walter Wallace Jr, a Black man who was approaching them holding a knife despite their order to stop and drop the weapon.

Several hundred members of the Pennsylvania National Guard have deployed to the city to help local police quell the civil unrest.

At least 30 law enforcement officers were injured during clashes in Philadelphia on Tuesday night, the majority of them hit by bricks and rocks, according to media reports.

Late Tuesday, the White House said in a statement that the reignited Black Lives Matter protests in Philadelphia are the result of the "Liberal Democrats' war against the police."

The White House added that the Trump administration stands with the police and is ready to deploy any federal resources to restore order.

The acts of looting and violence in Philadelphia, Pennsylvania, following the police killing of an African American man are inexcusable, US Democratic presidential candidate Joseph Biden told reporters on Wednesday.

"There is no excuse whatsoever for the looting and the violence," Biden said.

On Monday, riots broke out in Philadelphia after police officers shot dead Walter Wallace Jr. who approached them while holding a knife despite being ordered to stop and drop the weapon. The rioting continued on Tuesday and spilled over to New York City. Some 30 police officers were injured in the riots and numerous businesses damaged and looted.

Several hundred members of the Pennsylvania National Guard have been deployed to Philadelphia to help local police quell civil unrest.

"The victim’s father said, do not do this," Biden added.

Nearly 30 people have been arrested during reignited Black Lives Matter protests in the New York city in response to a police shooting in the US state of Philadelphia that left an African American man, Walter Wallace Jr, dead, the NBC New York broadcaster reported on Wednesday.

"The riots in Philadelphia are the most recent consequence of the Liberal Democrats’ war against the police. Law enforcement is an incredibly dangerous occupation, and thousands of officers have given their lives in the line of duty. All lethal force incidents must be fully investigated. The facts must be followed wherever they lead to ensure fair and just results. In America, we resolve conflicts through the courts and the justice system", the White House statement read.

It added that the Trump Administration stood proudly with the police, and was ready to deploy any resources to cease the violence.

The Walmart and Five Below are being re-looted after police left the area pic.twitter.com/IRVdhHGXLb

Officers are being bombarded with objects and the crowd is advancing on them like they are ready for violence. Somebody help these cops. What the ever living fuck. Philadelphia, PA #Philly pic.twitter.com/mNjRfDAza0

Around 9:20 p.m., protesters started throwing objects at a small group of officers and chased them near 52nd Street.

Police said they were being attacked by protesters at 52nd and Market Streets and used pepper spray and batons to protect themselves and make numerous arrests.

Around 9:30 tonight - this is when backup police presence showed up, began shoving people many of with bikes and baton many of whom were just standing on the street, saw multiple arrests. pic.twitter.com/3Ar5mVUD6V

Some pushing and spitting as tensions rise at the police line: pic.twitter.com/H5T1r4Ac3D

Protesters Return to Streets in Philadelphia Following Shooting of Black Man by Police
000000
Popular comments
But won't a lot of looting help facilitate a stronger recovery?
frank false flag
28 October 2020, 10:10 GMT1
000000
This event will undoubtedly help Trump and most possible he will be elected. The majority of the USA people is ignorant and full believer of the Zionist media stuff. See people that support Trump declared in the media that they want a no-socialist government, although many of them had to sell their house to pay for doctors and medicine and hospitals.