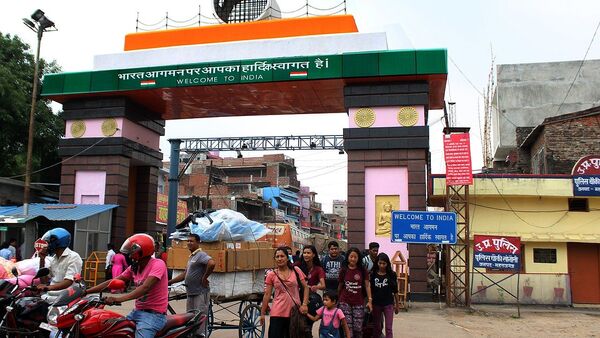 Dhairya Maheshwari
All materials
In his Dussehra greetings to India's Prime Minister Narendra Modi last week, Nepal's Prime Minister KP Sharma Oli stood by an old map of Nepal showing the disputed regions of Lipulekh, Kalapani and Limpiyadhura within Indian borders. However, after a furious backlash he blamed a technical glitch for the older map being shown.

India-Nepal Eminent Persons' Group (EPG) member Mahendra Lama has called on New Delhi to accept revisions to the 1950 Treaty of Peace and Friendship with Kathmandu to help solve the border dispute and other differences between the two nations.

"The EPG report has far-reaching implications. They will take care of the border friction and build and consolidate ties between Nepal and India," Lama told Sputnik. He is also an academic at the Centre for South Asian Studies at New Delhi-based Jawaharlal Nehru University (JNU).

The EPG, which has eight members - four from each country - was founded in 2016 during a visit by Nepal’s Prime Minister KP Sharma Oli to India. The intergovernmental panel, tasked with the agenda of looking into friction between the two neighbours, came out with a report in 2018 after having met eight times in two years.

Lama said the major recommendation by the EPG was to revise the 1950 Treaty of Peace and Friendship, which forms the basis of the ties between Nepal and India.

Although Lama was sorry that the report's findings had yet to be submitted to the Indian government, he also warned that bilateral ties couldn’t remain "frozen in time" forever. “The EPG report addresses the overall relationship and brings it up to date with current realities,” he explained.

Nepalese officials have often complained about Modi’s refusal to “formally accept” the report. “With the re-opening of high-level engagements between the two countries, I hope that the report should be officially submitted in the next six months,” reckoned Lama.

He said that the 1950 treaty clause specifying Nepal could only import heavy weapons from India had been removed from the revised agreement.

Lama dismissed concerns that diversification of Kathmandu’s defence ties with Beijing at a time when militaries from India and China were engaged in a five-month-long border stand-off would “hurt” India’s interests.

“We have factored in all the pros and cons of revising some of the old treaty clauses, which have become obsolete,” he said.

Lama's remarks come days ahead of a visit by Indian Army Chief General Manoj Mukund Naravane to Nepal, where he is set to receive the rank of Honorary General of the Nepalese Army by President Bidhya Devi Bhandari.

Last week, the head of India’s external intelligence Research and Analysis agency also paid a visit to Kathmandu and he called upon Oli.

The visit marks a breakthrough in bilateral ties after months of acrimony in the wake of Nepal Parliament approving a map showing three border regions, controlled by India, as part of Kathmandu’s jurisdiction.

Nepalese leadership has taken India to task for building a road through the dispute territory, which lies at the junction of India, China and Nepal. The new road, opened by India’s Defence Minister Rajnath Singh in May this year, cut the travel time between the Indian state of Uttarakhand and the Hindu holy site of Kailash Mansarovar, located in China’s Tibet Autonomous Region.