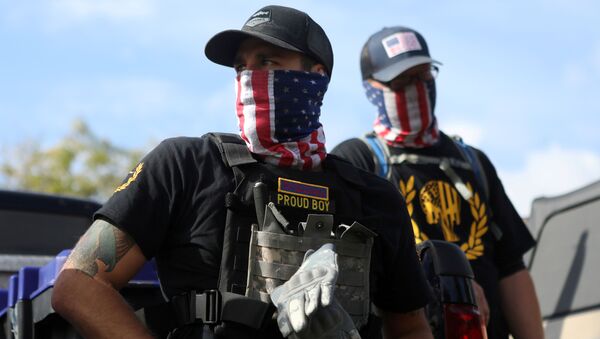 © REUTERS / JIM URQUHART
Subscribe
With just six days to go before the United States Presidential Election between incumbent Donald Trump and former Vice President Joe Biden, there are fears of eruptions of violence across the country regardless of the result.

The report, entitled 'Standing By: Right-Wing Militia Groups and the U.S. Election' was released last Wednesday by the Armed Conflict Location and Event Data Project (ACLED) in collaboration with MilitiaWatch. It cites Georgia, Michigan, Oregon, Pennsylvania, and Wisconsin to be at high risk of increased militia activity in the lead-up and following the 3 November election.

The joint effort cautions that militias may be active in capitals, surrounding towns, medium-population cities, and suburban areas with centralized zones.

“Militia groups and other armed non-state actors pose a serious threat to the safety and security of American voters”, the study claims.

“Throughout the summer and leading up to the general election, these groups have become more assertive, with activities ranging from intervening in protests to organizing kidnapping plots targeting elected officials".

The organisations are prepped for both urban and rural combat, use propaganda, and work as “security operations” for online and real-life events.

“There is an increasing narrative and trend that groups are organizing to ‘supplement’ the work of law enforcement or to place themselves in a narrowly defined ‘public protection’ role in parallel with police departments of a given locale”, said the report.

Many of the states named have the president and his Democratic rival neck and neck in polling and will be essential in determining the election outcome.

According to a poll from Univision, Joe Biden maintains leads in key battleground states. President Trump, on the other hand, holds a slight lead in Texas with just a few days left before Election Day. #MTPDaily pic.twitter.com/flgHmQe84R

​ACLED spokesman, Sam Jones, told American media on Tuesday saying his organisation and MilitiaWatch have had 80 groups under watch since the beginning of the summer - most of which are right-wing.

"Still, these risks do not mean that violence is inevitable," Jones said. "Voters should not be intimidated. Rather, we hope people are able to use the data to evaluate their own threat environment and organize locally to stay safe, reduce polarization in their communities and, ultimately, mitigate the risk of violence", Jones said.

They outline nine militia groups as the “most active” in the US which could take action before and after the election, namely: Three Percenters, Proud Boys, Oath Keepers, Light Foot Militia, Civilian Defense Force, American Contingency, Patriot Prayer, Boogaloo Bois, and People’s Rights.