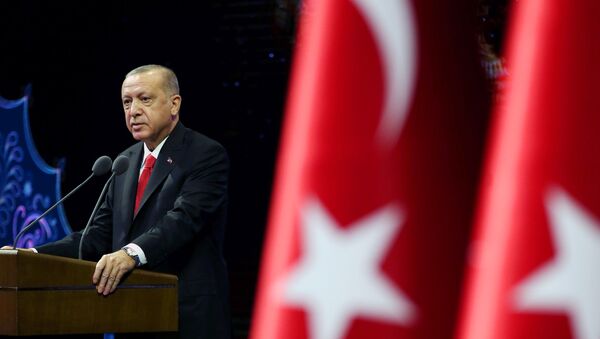 Aleksandra Serebriakova
Moscow-based Sputnik correspondent specializing in foreign affairs.
All materialsWrite to the author
Turkey said earlier that diplomatic and legal action will be taken as a response to the caricature of President Recep Tayyip Erdogan that was published by French magazine Charlie Hebdo.

Turkey's President Recep Tayyip Erdogan said on Wednesday that western countries want to "relaunch the crusades" by attacking Islam. The comment was made as Erdogan addressed members of his AK Party in parliament.

"France - and Europe as a whole - does not deserve this provocative, dirty, hateful and divisive policy pursued by Macron and those who share his views", Erdogan said during his speech, after relations had worsened between Erdogan and his French counterpart this month.

According to the Turkish president, it was "a question of honour" for his country to take a stand against attacks on the Prophet Muhammad.

Erdogan and Macron at Loggerheads Over Islam & Charlie Hebdo Cartoons

The most recent spat between the French and Turkish presidents came after a teacher in Paris, Samuel Paty, was murdered for showing his pupils, during a class on freedom of speech, cartoons of the Prophet Muhammad that were published in the satirical magazine Charlie Hebdo in 2015. Paty was subsequently beheaded by an 18-year-old of Chechen descent, Abdoullakh Anzorov, in an act French President Emmanuel Macron described as an "Islamist terrorist attack".

Macron defended the teacher's action and called him a "quiet hero", despite the fact that it is considered blasphemous among Muslims to depict the Prophet Muhammad in such a way.

Macron then announced a plan to "reform Islam" and make it more compatible with republican values, adding that the religion of billions of Muslims in the world was "in crisis". Erdogan replied to the comments by suggesting the French president undergo "mental checks". 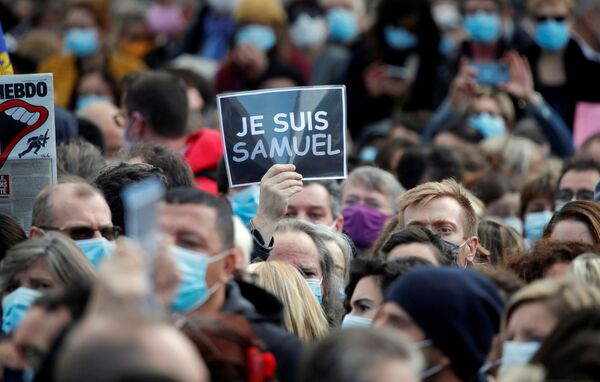 People gather at the Place de la Republique in Paris, to pay tribute to Samuel Paty, the French teacher who was beheaded on the streets of the Paris suburb of Conflans-Sainte-Honorine, France, October 18, 2020.
© REUTERS / CHARLES PLATIAU

The Turkish President then urged Turks to boycott French products; France responded by recalling its ambassador to Ankara.

On Tuesday night, Charlie Hebdo released a front-page, featuring a caricature of Edogan, who was depicted as drinking beer and making an indecent move towards a woman wearing a hijab.

The image was strongly condemned by French officials, with Erdogan accusing the magazine of sowing "the seeds of hatred and animosity". His office added that Turkey will now take all necessary diplomatic and legal action against Charlie Hebdo, with Ankara's Chief Prosecutor's office now reportedly launching an investigation into the matter.

On Wednesday, Erdogan also said that Ankara has a "legitimate right to act once again" if soldiers along its border with Syria are not removed.

On Tuesday, Russia called on Turkey to take joint action to eliminate terrorist groups in the Idlib de-escalation zone and "release citizens illegally detained by militants". In recent days, Moscow has stepped up its fight against terrorist groups in Syrian Idlib with airstrikes.

According to information from Russian military officials, terrorists in Idlib are at present holding more than 2,000 people in custody, including medical workers and journalists.

Commenting on a recent Russian airstrike in Syria's Idlib, Erdogan claimed that "lasting peace in Syria was not wanted", despite Moscow's calls for joint action against terrorist groups in the territory.

In October 2019, Turkey launched an assault against Kurdish fighters from the Kurdistan Workers' Party (PKK) and the People's Protection Units (YPG) in Northern Syria, whom Ankara views as terrorists, dubbing the act an "Operation Peace Spring". Ankara announced back then that it would "clear out terrorists" on the border with northern Syria if the Kurdish YPG militia fails to withdraw from the territory.