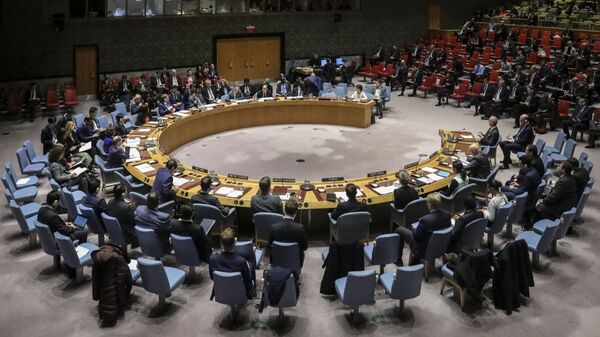 Morgan Artyukhina
All materialsWrite to the author
The Trump administration’s policy of shredding international agreements has driven many nations into the camp of US adversaries such as Russia and China, a former Pentagon senior analyst told Sputnik. However, even if Joe Biden wins the election, Washington’s assumptive position as global center of gravity won’t be immediately restored.

Michael Maloof, a former senior security policy analyst in the Office of the US Secretary of Defense, told Radio Sputnik’s Fault Lines on Tuesday the “economic system has been weaponized and has become a political weapon of use out of concern that there is this alternative world order being looked at very, very seriously by the East.”

Maloof noted some of those nations include China and Russia, but also Turkey and Iran and “all countries that belong to the” Shanghai Cooperation Organization.

“As long as Western countries are abiding by the Western financial system - and even the Russian ruble is pegged to the US dollar - as long as the dollar is so-called ‘world currency,’ they’re going to be able to be manipulated politically,” the analyst told hosts Jamarl Thomas and Shane Stranahan.

“The Trump administration has used particularly sanctions, not [just] against its so-called adversaries, but even against its friends, which was rather incredible. That has actually prompted a number of Western allies to begin to look eastward to get out from under that, especially if Trump is going to be reelected,” he said. “So that’s going to make for an interesting time.”

“I think that we’re seeing countries such as Russia and China, faced with sanctions on themselves, already are getting to the point now where they can’t be sanctioned any more, and as a result they’re just ignoring them,” Maloof said, noting this is the case “especially when it comes to trading with Iran, and they’re just basically going to skirt around those US sanctions, because there’s nothing more to be sanctioned.”

These countries, he said, are “just going to continue and try to build up on this notion of this alternative world order and begin to trade increasingly in their own currencies and not be pegged to any particular currency, even though the Chinese yuan may be a possibility. But I think for now, countries are prepared to trade in their own currencies and get out from under the dependency [on] the US dollar as long as they’re trading eastward. If they have to trade with the West, with the EU [European Union], then you have the Euro currency and the dollar that you have to contend with, and I think they want to pull away from that.”

“I think what’s happened as a result of sanctions, even on Western companies, particularly in the EU, that Trump has initiated for trading with Iran, and also countries that want to contribute to the defense programs in Russia, which is by US law a basis for sanctions, even on those companies, then they’re going to be looking more toward doing something alternatively, and that is now to look for this alternative world order. I think we’re going to see that develop more and more, especially if Trump gets reelected,” he said.

“What happened back in May of 2018, when Trump dropped out of the JCPOA [Joint Comprehensive Plan of Action], the Iranian nuclear agreement, that was a watershed moment. I think that was a wake-up call to Eastern countries that ‘we’ve gotta do something alternatively.’ Here Iran was in full compliance at the time with that agreement, and notwithstanding the fact that they had agreements and were in compliance, the US broke it,” Maloof said.

This, he noted, damaged any future prospects of the US convincing other nations to enter into such deals for many years to come.

Maloof said that former White House national security adviser John Bolton had exerted a particularly hostile influence over arms reduction treaties into which the US had entered, including the New Strategic Arms Reduction Treaty (New START) and the Treaty on Open Skies.

“We’re still seeing the remnants of neocons within the Trump administration such as [Secretary of State Mike] Pompeo and [Vice President Mike] Pence who want to perpetuate this notion of being a hard line toward Russia and especially toward China, and that’s had ramifications. Even if Biden gets in, these countries are not going to trust working with the US,” he noted.

Maloof said that depending on who wins the November 3 US presidential election, “this country will go in different directions, clearly. If Trump gets reelected, there will be the continued animosity with NATO and also with Turkey, probably more tolerance of Turkey. If Biden gets in, given the relationship that Biden has with [Turkish President Recep Tayyip] Erdogan, that could have the effect of creating a great schism within NATO, because Erdogan and Biden do not get along. And as a consequence, Turkey may look more increasingly eastward, which benefits the Russian perspective of trying to drive a wedge into NATO and breaking it up.”

The analyst noted that as the alliance struggles to find a new identity and purpose after the end of the Cold War, NATO members are increasingly likely to spiral off in pursuit of their own interests, even as it continues to expand its membership eastward, into former Soviet allies and even former Soviet republics.

“Biden, if he is elected, will basically have very poor relations with Russia, and Trump, I think, may - even though he’s imposed a lot of sanctions - may want to ease up on them and may want to work with [Russian President] Vladimir Putin, because he’ll be a lame duck, and he won’t have anything to lose. And, notwithstanding charges of collusion, he’s going to move forward, because he feels that he needs to, that there are areas of cooperation that they really do need to work with Russia on,” Maloof said.

“Biden will have more of a closer tie with China, certainly, but the United States will have far less of one under Trump,” he added.