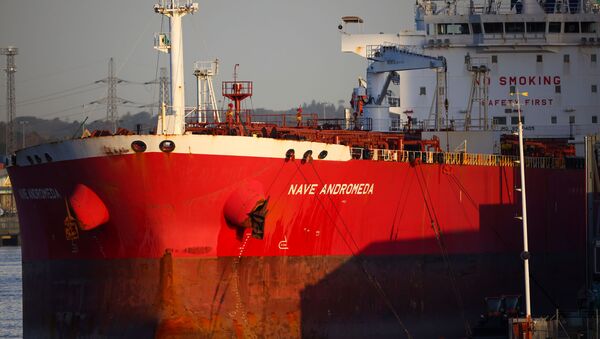 Svetlana Ekimenko
All materialsWrite to the author
The Liberian-flagged oil tanker Nave Andromeda was stormed by UK special forces on 25 October after the ship was hijacked by stowaways off the coast of the Isle of Wight, in the English Channel, with police saying that seven men were taken into custody.

UK special forces are reportedly on alert for jihadis that might be disguised as migrants and asylum seekers in the wake of Sunday’s incident involving the storming of the SBS oil tanker Nave Andromeda to tackle seven violent stowaways, writes the Mirror.

After an operation carried out by heavily-armed anti-terror troops, the apprehended fugitives now face the possibility of life behind bars after allegedly threatening the 22-man vessel near the Isle of Wight, in the English Channel.

A security source was cited by the outlet as saying:

“Special forces have been practising for an event like this for many years but lately their training has increased as it is thought to be only a matter of time before there is a more serious taking of a ship, possibly by terrorists.”

Another expert, Rear Admiral Dr. Chris Parry, spoke on Good Morning Britain to warn that the next hijacking could involve terrorists:

“Next time it may not be just stowaways. It could be terrorists, it could be people smugglers or anything. We've got to approach this problem in a much more sophisticated way, we've got to up our intelligence."

Parry added that the era of “mass migration” brought with it a whole range of fresh challenges.

“We're seeing more and more of these incidents occurring around the world and this is the second incident in our own waters in a couple of years now.”

"It ended well but if they had been armed or carrying explosives it would have been a very ¬high-risk operation.”

A group of stowaways on board the Nave Andromeda oil tanker hijacked the vessel and reportedly verbally threatened the crew at around 9 a.m. on 25 October.

Just several hours later, UK special forces took control of the 42,000-tonne ship after the mayday alert, detaining the seven stowaways on suspicion of seizing or exercising control of a ship by use of threats or force.

16 members of the SBS, two Wildcats, two Merlins and with support from HMS Richmond, took NINE Minutes to board and detain Seven stowaways / hijackers and rescue the crew of MV Nave Andromeda. All on board are reported safe. Job well done.! pic.twitter.com/zy2p95P50f

​As the suspects were detained under maritime laws they potentially face a maximum sentence of life imprisonment.

In a similar incident of migrants allegedly ghosting on UK vessels, four fugitives were removed from a cargo ship called the Alessandra Lehmann near Brighton on Thursday after boarding in Rouen, France, according to the Mirror. The stowaways were only spotted when the vessel reached Britain.

In response, the UK Home Office was cited as saying:

“We are fixing our broken asylum system… The new system will be fairer and firmer… And it will stop exploitation by those who come here illegally and often make unfounded or ­meritless claims to remain.”

The United Kingdom has faced a spike in the influx of refugees crossing the English Channel from France this year, with the number of clandestine arrivals to the country currently exceeding 300 per day - the highest numbers on record.