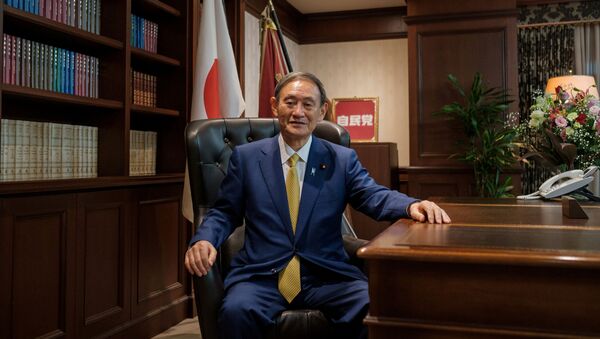 "[Japan should not] put off the solution of the Northern Territories dispute until the next generations, but solve it with our own hands," Suga told Japanese upper house lawmaker Muneo Suzuki, who later shared the statement with reporters.

On 29 September, Russian President Vladimir Putin held the first phone talks with Suga after the latter's appointment. The two leaders reaffirmed commitment to continued boosting of all aspects of the bilateral cooperation in the interest of peoples in both countries and the Asia-Pacific region in general.

The Moscow-Tokyo relations have long been complicated by the fact that the two countries have never signed a permanent peace treaty after World War II. The main issue holding the two countries back is their dispute over a group of four islands — Iturup, Kunashir, Shikotan, and Habomai — referred to as the Southern Kurils by Russia and the Northern Territories by Japan.

In November 2018, Abe and Putin agreed to accelerate peace treaty talks on the basis of a Soviet-era joint declaration. The document, signed in 1956, stipulates among other things that the Soviet Union would transfer the two disputed islands — Habomai and Shikotan — to Japan following the conclusion of a peace treaty. The agreement by the two leaders to use the declaration as the basis for peace negotiations spurred a series of meetings held the following year by Putin and Abe and their foreign ministers.