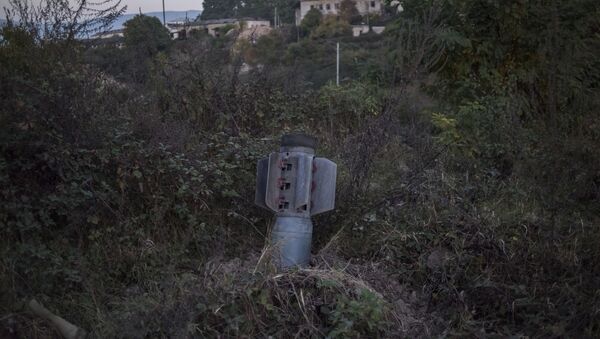 The US State Department announced on Sunday that a new humanitarian ceasefire in Nagorno-Karabakh was going to enter into force at 8:00 a.m. local time (4:00 GMT) on 26 October.

The fighting on the contact line in Karabakh began on 27 September. Armenia and Azerbaijan accuse each other of unleashing hostilities, Karabakh reports the artillery shelling of the peaceful settlements of the unrecognised republic, including its capital, Stepanakert. Armenia has declared martial law and - for the first time - general mobilisation, claiming that Ankara is actively supporting Baku. Partial mobilisation was introduced in Azerbaijan.

The leaders of Russia, the United States and France have called on the opposing sides to end the clashes and to commit themselves to begin negotiations without preconditions.

Kremlin noted that the conversation took place at the initiative of the Turkish side.

"The development of events in the zone of the Nagorno-Karabakh conflict was discussed. The Russian side expressed deep concern over the ongoing hostilities, as well as the increasingly large-scale involvement of terrorists from the Middle East in clashes", the statement says.

Putin informed his colleague about the contacts with the leadership of Azerbaijan and Armenia and the steps being taken to achieve an armistice as soon as possible and de-escalate the crisis, it says.

"It was agreed to continue to carry out coordination between the foreign and defence ministries of Russia and Turkey, as well as intelligence agencies of the two countries", the Kremlin said.

US President Donald Trump on Tuesday said it was upsetting to see that the ceasefire between Armenia and Azerbaijan has failed.

"Yeah it's disappointing to see that. That's what happens when you have countries, countries that have been going at it for a long time,” Trump said, he said when asked whether he was disappointed that the ceasefire collapsed. “They'll get back together.”

During separate calls with @NikolPashinyan and @presidentaz, I pressed the leaders to uphold their commitments to cease hostilities and pursue a diplomatic solution in the Nagorno-Karabakh conflict. Armenians and Azerbaijanis deserve to live in peace.

"As a result of Armenia's treacherous rocket strike on Azerbaijan's Barda area, three civilians are killed and 10 are seriously wounded, including women and children", aide to Azerbaijani president Hikmet Hajiyev said on Twitter, adding that there was on child among the killed.

He later added that the number of victims has increased to four.

As result of Armenia's henious missile attack to Barda region 3 civilians killed and 10 people, kids/women seriously wounded. #Warcrimes of Armenia continues. Today MOD of Armenia made statement that they will hit harshly. By that they meaning civilians, kids and women.

The Defence Ministry of the self-proclaimed Nagorno-Karabakh Republic on Tuesday reported that the total number of its servicemen killed in hostilities with Azerbaijani forces had increased by 35 to over 1,000.

The names of all 35 deceased servicemen were published by the ministry on its official website. As of Tuesday, the death toll from clashes on the contact line is 1,008.

At least 17 Armenian servicemen are being held in Azerbaijan, the head of the forensic department of the Armenian Investigative Committee said Tuesday.

"Seventeen Armenian servicemen are being held captive in Azerbaijan, we are verifying the information on another two," Rafael Vardanyan told a press conference.

The Armenian Defence Ministry accused the Azerbaijani armed forces on Tuesday of shelling an Armenian frontier post on the border with Iran, and also warned that retaliatory attacks would follow.

"This morning, from 10:00-10:15 [06:00-06:15 GMT], the Azerbaijani side violated the ceasefire again and used drones (of which one fell on the Armenian territory) and artillery weapons to shell a border post on the southern border with Iran ... The Armenian Defense Ministry reports it will have to launch response strikes toward Azerbaijani forces," the Armenian Defence Ministry's spokeswoman, Shushan Stepanyan, wrote on Facebook.

The Azeri attack did not result in any injuries and fatalities, the Armenian military added.

“Currently, local clashes continue in some directions of the #Artsakh -#Azerbaijan conflict zone. Artsakh Defenсe Army units continue to implement combat tasks, keeping the operative-tactical situation under a control,” a tweet from the armed forces read.

The Artsakh Defenсe Army went on to confirm earlier reports from the Ministry of Emergency Situations that relative calm presided over the conflict zone overnight but that shelling continues in some areas.

Leader of the unrecognized Nagorno-Karabakh Republic Arayik Harutunyan on Tuesday appointed a new defence minister to replace his predecessor who was injured in combat.

“I signed a decree according to which General-lieutenant Jalal Anatolii Harutyunyan was dismissed by Artsakh Republic’s Minister of Defenсe from the position of commander of defense army and by another order, Major General Michael Albert Arzumanyan was appointed Minister of Defence of Artsakh [Nagorno-Karabakh], awarding him with the military rank of lieutenant general,” the leader read from a statement in a video posted on Facebook.

Harutunyan added that the dismissal was due to wounds the army chief received in combat operations but did not provide details, discouraging commentary on the matter.

“The decision to release Jalal Harutyunyan is imperative at the moment, due to the wound he received in the military positions these days, and should not be a reason for comments,” Haruttyunyan said, according to a translation provided by Public Radio of Armenia.

The leader went on to wish the former a speedy recovery and a speedy return to service.

The situation in the settlements near the contact line of the unrecognized Republic of Nagorno-Karabakh was relatively calm during the night, the local emergency service said on Tuesday.

"The night of 26-27 October was relatively calm in all the settlements of Artsakh [Nagorno-Karabakh]," the service said in a statement.

It added that the situation remained tense in the region of Askeran.