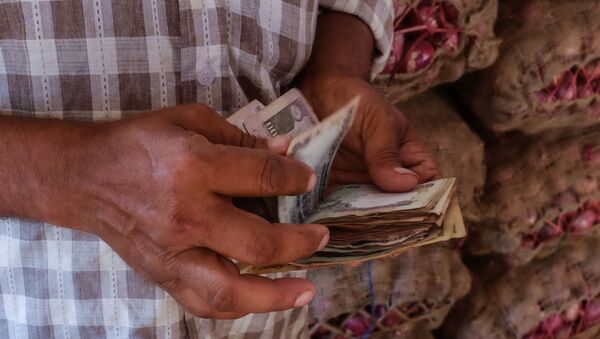 © AFP 2021 / ROBERTO SCHMIDT
Subscribe
Advitya Bahl
All materialsWrite to the author
Income tax department officials have unveiled that personal staff members or associates were made dummy directors or partners of these shell entities while all bank accounts were managed and controlled by these entry operators.

Detectives in India’s income tax department have unveiled a fraud worth INR 5 billion ($67 million) through fake billing by of entry operators, intermediaries, cash handlers in regions such as Delhi and Goa in India.

According to the income tax officials, searches and raids were conducted in 42 premises across several states in the country on a large network of individuals.

"The search led to evidence exposing the entire network being seized. So far, documents proving accommodation entries worth more than INR 5 billion ($67 million) have already been found and seized," the Income Tax Department revealed it in a statement on Tuesday.

Several shell firms were used by the entry operators for layering unaccounted money and cash withdrawals against fake bills and unsecured loans, an official at the income tax department told Sputnik on condition of anonymity.

The federal agency has taken statements of entry operators, their silent partners, the cash handlers and the covered beneficiaries which lay bare the entire money trail.

"Several people who were searched were also found to be controllers and beneficial owners of a slew of bank accounts and lockers. These were opened under the names of family members and trusted employees, and were managed in collusion with the bank officials, through digital media. These are being investigated further," the income tax department said in the statement.

The fraudsters have invested heavily in property in prime cities and in fixed deposits to the tune of several hundred million rupees.

000000
Popular comments
◄ WORK AT HOME FOR USA ► My last month paycheck was for 11000 dollars… All i did was simple online work from comfort at home for 3-4 hours/day that I got from this agency I discovered over the internet and they paid me for it 95 bucks every hour…. for more info visit any tab this site Thanks a lot for more info visit any tab this site Thanks a lot ........................................ .....................................................Copy Here………..W­­o­­r­­k­­6­­0­­0.­­ＣＯＭ
TomBom
27 October 2020, 14:26 GMT1
000000
Newsfeed
0
New firstOld first
loader
LIVE
Заголовок открываемого материала
Access to the chat has been blocked for violating the rules . You will be able to participate again through:∞. If you do not agree with the blocking, please use the feedback form
The discussion is closed. You can participate in the discussion within 24 hours after the publication of the article.
To participate in the discussion
log in or register
loader
Chats
Заголовок открываемого материала
Worldwide
InternationalEnglishEnglishMundoEspañolSpanish
Europe
DeutschlandDeutschGermanFranceFrançaisFrenchΕλλάδαΕλληνικάGreekItaliaItalianoItalianČeská republikaČeštinaCzechPolskaPolskiPolishСрбиjаСрпскиSerbianLatvijaLatviešuLatvianLietuvaLietuviųLithuanianMoldovaMoldoveneascăMoldavianБеларусьБеларускiBelarusian
Transcaucasia
ԱրմենիաՀայերենArmenianАҧсныАҧсышәалаAbkhazХуссар ИрыстонИронауОssetianსაქართველოქართულიGeorgianAzərbaycanАzərbaycancaAzerbaijani
Middle East
Sputnik عربيArabicArabicTürkiyeTürkçeTurkishSputnik ایرانPersianPersianSputnik افغانستانDariDari
Central Asia
ҚазақстанҚазақ тіліKazakhКыргызстанКыргызчаKyrgyzOʻzbekistonЎзбекчаUzbekТоҷикистонТоҷикӣTajik
East & Southeast Asia
Việt NamTiếng ViệtVietnamese日本日本語Japanese俄罗斯卫星通讯社中文（简体）Chinese (simplified)俄罗斯卫星通讯社中文（繁体）Chinese (traditional)
South America
BrasilPortuguêsPortuguese
NewsfeedBreaking
12:52 GMTSeparate Bill Introduced in US Congress Pushes $1 Bln Funding for Israel's Iron Dome Defence System
12:24 GMTRussia's SCO Envoy Says Taliban Recognition Not on Agenda, While Dialogue is Important
12:12 GMTLava Flow Destroying Settlements Forces Evacuation as La Palma Volcano Continues to Erupt
12:10 GMTUNSC Discussing Security and Climate Change
12:08 GMTBalls to the Wall: Oklahoma Man Gets 12 Years in Prison for Failed Castration of Volunteer
12:02 GMTThe Spy Who Abused Me: Director of Latest Bond Movie Calls Sean Connery's 007 a 'Rapist'
11:56 GMTIt's a Gas!... Russia Blamed for Europe's Fuel Crisis
11:45 GMTWhen It Rains, It Pours: UK Defence Ministry Reportedly Allows Another Afghan Data Breach
11:40 GMTMan United Players Frustrated as the Team Out of Carabao Cup After Stunning Loss to West Ham
11:01 GMTPoland to Deploy 250 US-Supplied Abrams Tanks on Eastern Border, Defence Minister Says
10:50 GMTGerman Greens Leader Accuses Russia of Exacerbating Gas Crunch
10:38 GMTRIP 'Godfather of Black Cinema': Filmmaker Melvin Van Peebles Dies at 89
10:28 GMTBoris Johnson Reveals Why He Wants to Be Renamed in Honour of Ancient Greek God of North Wind
10:22 GMTHis Royal Highness No More? UK Queen Could Strip Prince Andrew of HRH Title Amid Sex Assault Case
10:02 GMTJohnny Depp Says No One is 'Safe' From Cancel Culture as He Hints That 'MeToo' Got Out of Hand
09:51 GMTPutin, Zelensky to Meet When Both Are Ready, Kremlin Says
09:49 GMTMarseille Football Team Blames Mass Brawl of Spectators on Provocation by Angers Fans - Video
09:31 GMTGeneva to Host New Round of Russian-US Strategic Stability Talks Next Week, American Ambassador Says
09:24 GMTUS House Committee Approves Amendment Recommending Sanctions Against Russian Officials
09:23 GMTSCO to Coordinate Effort to Prevent Threats Coming From Afghanistan, Russian General Staff Says