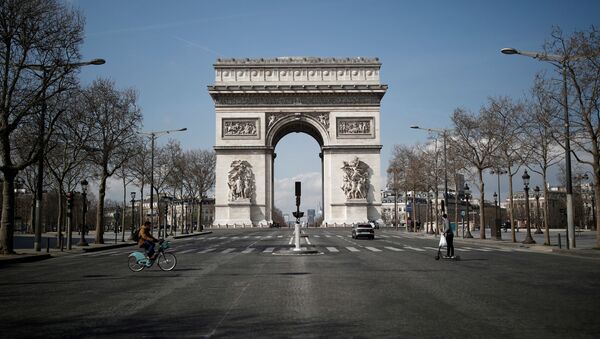 Sofia Chegodaeva
All materialsWrite to the author
The Charles-de-Gaulle Etoile Metro station has been closed pending an investigation.

Inspection of the area surrounding the Arc de Triomphe in Paris is over with nothing suspicious having been found, police said.

Earlier on Tuesday, the area surrounding the monument was evacuated after security services had received a bomb threat.

According to authorities, evacuation in the area started at about 3 pm local time.

Videos from the scene have been posted online.

Bomb threat at the Arc de Triomphe, in #Paris , #France. The area around the scene has been evacuated including metro stations and part of the #ChampsElyséespic.twitter.com/8kNCkC0MFS

BREAKING - Arc de Triomphe in #Paris evacuated after a bomb threat. A large perimeter around the monument is now secured by police units.pic.twitter.com/EOVL6CaVXe

​According to some sources, a bag full of cartridges was discovered by police in the area. A photo of the alleged discovery has been posted on Twitter.

A video emerged showing people rushing from the Charles-de-Gaulle Etoile Metro station outside after a security alert was announced.​