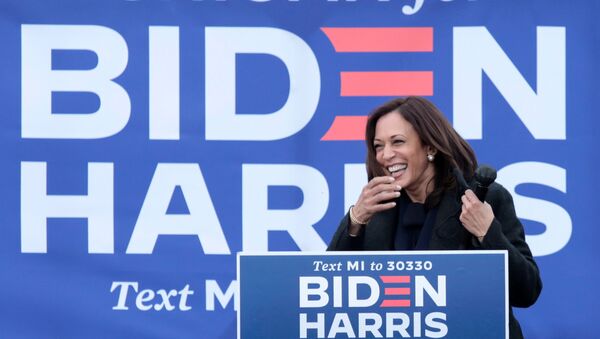 As the US Election Day comes closer, the main candidates for the presidential post - Donald Trump and Joe Biden - as well as their running mates, VP Mike Pence and Biden's vice presidential pick, Kamala Harris, appear to be hitting more and more cities with less and less time in between to regroup their thoughts.

Kamala Harris, the vice presidential pick of Democratic US 2020 presidential election candidate Joe Biden, while touring states in a bid to mobilize voter support ahead of the 3 November election day, was caught on a hot mic asking where she was, just seconds before beginning her speech.

In a manner that is associated by many with Biden, who is no stranger to gaffes and awkward commentary, his running mate, Harris, began her speech at a rally in Cleveland, Ohio, on Saturday, as it happened, a bit too early, quickly checking in with those around her to learn exactly where she was.

“Are we in Cleveland?”, the VP pick asked without realizing that her microphone was on. She was, in fact, in Cleveland but that didn't stop the internet.

The moment quickly drew attention on social media, and of course by those most interested in capitalizing on Harris' moment of uncertainty.

"A hot mic caught Kamala Harris asking staff 'are we in Cleveland?' before she spoke. cc. OHIO", tweeted a POTUS son, Eric Trump, providing the video.

A hot mic caught Kamala Harris asking staff "are we in Cleveland?" before she spoke.

As if that wasn't enough, Harris, during her speech, also accidentally overestimated the US death toll in the COVID-19 coronavirus, mistakenly claiming that "over 220 million" Americans have died.

The US continues to be the most hit by COVID-19 country, having, as of Sunday, over 8,630,000 registered cases, with over 225,000 deaths, according to data collated by the Johns Hopkins University.