8 Days to Go Before US Presidential Election: Texas Leads in Early Vote, ‘New Voters’ on Uptick 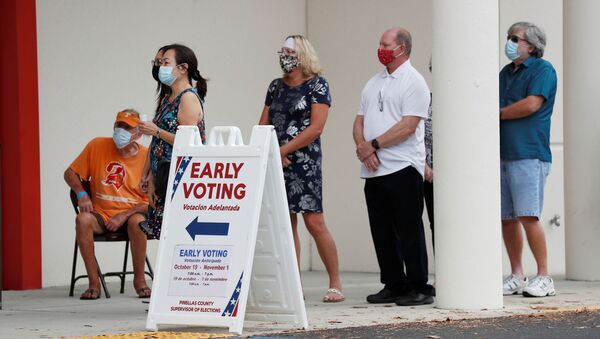 © REUTERS / Octavio Jones
Subscribe
Svetlana Ekimenko
All materialsWrite to the author
Pre-election day voting has been skyrocketing nationwide in the US ahead of 3 November, spurred by the ongoing coronavirus pandemic, with states reporting record-breaking turnouts.

Just slightly over a week ahead of the US presidential election, a record-breaking turnout of early voters is being registered across the entire country.

According to the independent US Election Project, run by the University of Florida, as of Sunday more than 59 million people had voted, surpassing all 2016 early ballots.

While the Democrats, who strongly encouraged early voting, have been leading the initial balloting, Republicans are narrowing the gap, with GOP voters showing up for early in-person voting.

Here's what you need to know today:

Texas is one of the states that has been showing an unprecedented level of early voting.

According to the Election Project, on Sunday 80 percent of the early 2016 vote had already turned out. 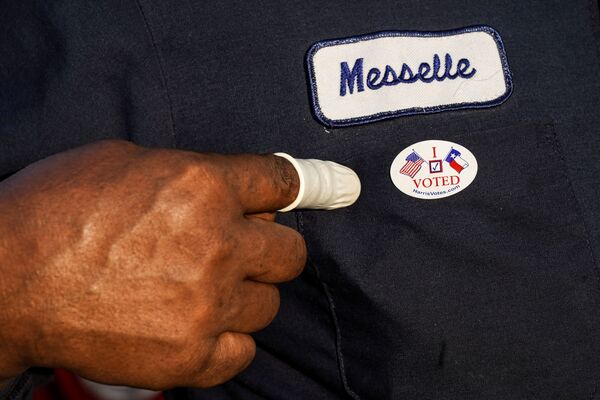 A person wearing a finger sack points at an "I Voted" sticker after casting ballot for the upcoming presidential election as early voting begins in Houston, Texas, U.S., October 13, 2020.
© REUTERS / GO NAKAMURA

Michael McDonald, a political science professor at the University of Florida who administers the Election Project, tweeted to wonder just how far Texas turnout will outpace that of 2016.

Second TX #earlyvote update of the day lifts the state above 80% of its 2016 total turnout. Folks, Texas still has in-person early voting until Friday, plus Election Day. No doubt Texas turnout will be above 2016. Question is, how much? https://t.co/s8K2xFDeSA

​More than 7.1 million ballots have already been received in the state, according to the US Elections Project website.
A new poll by the Dallas Morning News and the University of Texas at Tyler shows Democratic hopeful Joe Biden surging ahead among likely voters, with 48 percent to Donald Trump’s 45 percent.

The long-time red state of Texas hasn't voted for a Democratic presidential candidate since choosing Jimmy Carter over Republican Gerald Ford in 1976.

In Florida, where Donald Trump won by a little over one percentage point in 2016, the Democrats continue to maintain an advantage in pre-election turnout, according to Catalist data. However, as more voters participate in early voting across the state, the gap is believed to be narrowing. 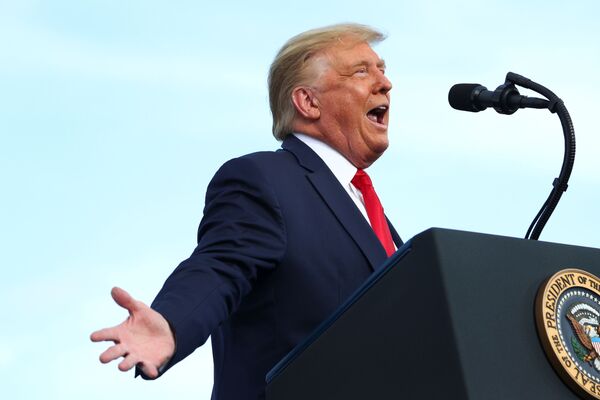 The outlet's polling conducted by SSRS suggests that about 35 percent of likely voters in Florida acknowledged they have already cast their ballots, with 71 per cent reportedly backing Joe Biden and 27 percent backing Trump.

Fifty-six per cent of those who haven’t yet cast a ballot say they back Trump, and 40 percent claim to support Biden.

In an interesting trend, younger voters (age 18-29) are shown as casting more ballots and constituting a greater share of the pre-Election Day vote than at the same time four years ago in key battleground states, according to data from Catalist, a company that provides data, analytics and other services.

Early voting among those 65 and older has shrunk as a proportion of total early voting.

Early voting data suggests a surge in the number of new or infrequent voters who have already voted. Thus, 25 percent of the total votes cast, according to an AP analysis of data from the political data firm L2, are from people younger than the typical voter, with similar shares of them registering Democratic and Republican up until now. 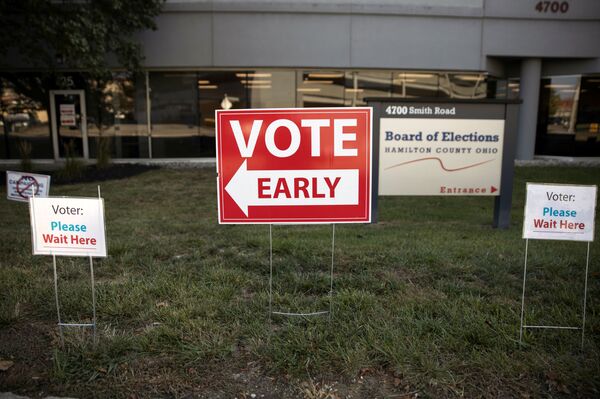 Early voting signs are placed outside of the Hamilton County Board of Elections building for the upcoming presidential election, as early voting begins in Cincinnati, Ohio, U.S., October 6, 2020. REUTERS/Megan Jelinger
© REUTERS / MEGAN JELINGER

It is these voters that have led some analysts to predict that over 150 million total votes will be cast in the US elections, with the potential to represent the highest turnout since 1908.