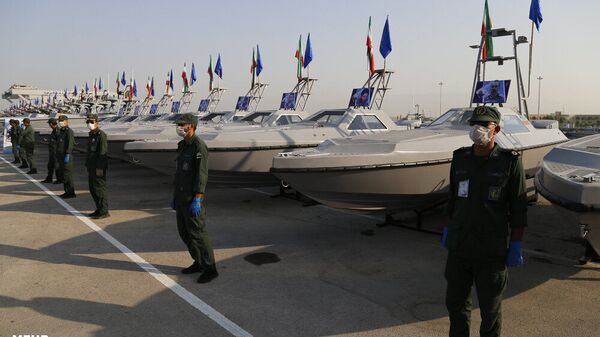 Max Gorbachev
All materialsWrite to the author
On 27 September, fighting between Armenia and Azerbaijan broke out over the breakaway region of Nagorno-Karabakh. The recent flare-up is the deadliest since the two sides fought a war in the 1990s. According to Iranian officials, dozens of mortar shells from both sides have fallen on the country’s territory in recent weeks.

"Security prevails" in Iran amid the Nagorno-Karabakh conflict, said Mohammad Pakpoor, a brigadier general in the Islamic Revolutionary Guards Corps. The senior military commander reassured residents of Iran’s East Azerbaijan Province of safety and security during his visit to the area.

"Although a number of shells fired in the Karabakh dispute have hit the Iranian soil, security prevails along the borders and there is no threat to the country", the general said.

His statement came after several rockets fired by Azerbaijani and Armenian forces fell on Iranian villages and farms in the province.

"Iran will give a tough response to any form of threat and violation", Shekarchi said, while urging the two sides to resolve the dispute peacefully and through dialogue.

What is going on in Nagorno-Karabakh?

Bitter fighting erupted between Armenia and Azerbaijan on 27 September, with both sides accusing each other of starting the hostilities. Baku and Yerevan held talks in Moscow this month and twice agreed to a ceasefire (on 10 and 17 October). However, both sides have resumed fighting and accused each other of violating the truce.

Russian President Vladimir Putin has said that each side has lost about 2,000 people and in all 5,000 have died in the conflict since the start of the hostilities.

The dispute over the Nagorno-Karabakh region between Armenia and Azerbaijan has lasted for decades. The area is formally part of Azerbaijan, but the majority of the population is Armenian. In 1988, the region expressed its desire to become part of Armenia and this led to clashes among civilians. Following the collapse of the Soviet Union in 1991, Nagorno-Karabakh declared independence from Azerbaijan, which sparked a full-blown war between Armenia and Azerbaijan. The war lasted until 1994, when the two sides signed a ceasefire mediated by the OSCE Minsk Group, co-chaired by France, Russia, and the United States. Despite the truce, tensions have persisted and fighting has sporadically occurred between the two sides.

However, the recent flare-up is the worst since the war in the 1990s and has been exacerbated by Turkey, a historical ally of Azerbaijan. Turkish President Recep Tayyip Erdogan previously said that Ankara would support Baku by any means, which is in line with the "two states, one nation" principle.

Armenia's Prime Minister Nikol Pashinyan has claimed that the Turkish military is controlling Azerbaijan’s operations in Nagorno-Karabakh and has claimed that Ankara is seeking to continue the Armenian genocide, referring to the mass killings of Armenians by the Ottoman Empire during World War I. There have been reports that mercenaries from Syria and Libya are fighting on the side of Baku. French President Emmanuel Macron has said the militants were transported to Baku via Turkey.