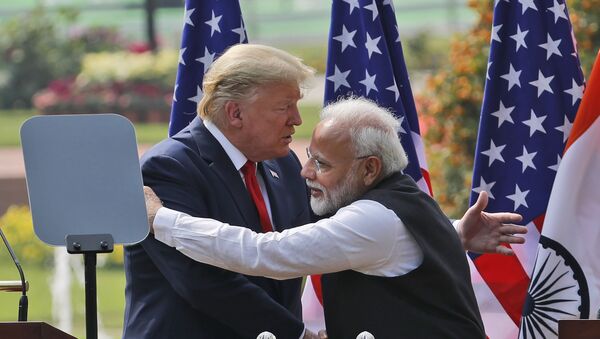 Shweta Sharma
Sputnik correspondent
All materialsWrite to the author
US President Donald Trump and his Democratic rival, former Vice President Joe Biden, sparred and traded allegations in the second and final presidential debate ahead of the 2020 election. The election will be held on 3 November.

US President Donald Trump has said that India has "filthy" air. The comment came as he addressed his decision to pull out from the 2015 Paris climate accord during the second presidential debate on 22 October.

"Look at China, how filthy it is. Look at Russia. Look at India. The air is filthy. I walked out of the Paris Accord as we had to take out trillions of dollars and we were treated very unfairly", said Trump during the televised showdown in Nashville, Tennessee.

Trump was justifying pulling out from the Paris climate accord, stating that he values jobs as it would have made the US a non-competitive nation. Biden warned that the US cannot handle four more years of Trump rolling back environmental regulations.

Trump’s negative mention of India along with Russia and China during the presidential campaign for a second time in several weeks led to an avalanche of reactions on social media, with questions being raised in Indian politicial - and other - circles over Prime Minister Narendra Modi's friendship with POTUS.

Earlier, Trump accused the aforementioned countries of not revealing the real COVID-19 death toll - a claim consistently denied by Delhi, Moscow, and Beijing.

A leader of India's main opposition party Congress, Kapil Sibal, took to the moment to get in a jibe at Modi calling Trump's jabs the "fruits of friendship" and reminding him of the "Howdy Modi" rally - a mega event held in Texas last year while the Indian PM visited the US.

​Several users insisted the Indian prime minister should respond to Trump over his repeated jibes at India.

Modi had spent ₹3.7 crores on flowers & covered up the slums to beautify Trump's route for the 'Namaste Trump' rally in Ahmedabad.

But Trump called India 'filthy' in the Presidential debate today!

Will Modi respond? Be rest assured, Modi won't say a word against his BFF Doland

If Indira Gandhiji was our PM now & #Trump would have had a #TrumpMeltdown & called my India #Filthy ,she would have destroyed him! If anyone else was our PM now, that person would have put #Trump in his place.
No Indian PM would put their tails between their legs like Modi ji.

​The US is the second-highest carbon dioxide emitter in the world, accounting for 15 percent of emissions, whereas India remains fourth-highest with 7 percent emissions, according to data from the Global Carbon Project published in December 2018.

Trump has used both his debates to attack India, unprovoked, this time calling its air “filthy” (which is true).

So much for Modi’s great diplomacy and Trump campaign rallies.