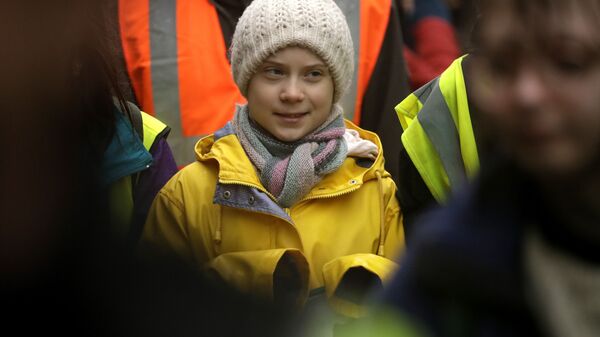 Igor Kuznetsov
All materials
Dagens Nyheter's real editor-in-chief Wolodarski admitted a legitimate risk of its independence being compromised by an outsider, yet maintained this was an exciting journalistic project and part of the newspaper's commitment to environmental issues.

Underage climate activist and media darling Greta Thunberg will become the editor-in-chief of Dagens Nyheter, the country's largest morning daily, for a day sometime at the beginning of December.

This stunt is rooted in the 17-year-old's incessant criticism of how the media handles the issue of climate change, most lately giving Dagens Nyheter a dressing down in mid-September. By becoming editor-in-chief, she will be able to show more concretely what she means by becoming involved in the decision-making process. The idea is a brainchild of Dagens Nyheter's editorial office.

Dagens Nyheter's perennial editor Peter Wolodarski underscored that not taking the climate issue seriously enough is the most common criticism the newspaper receives.

"We want to be better at illuminating this issue from a variety of perspectives, as one of the most important challenges we face as journalists. This is a way to do it and we are curious about what we will learn from her participation", Wolodarski told Dagens Nyheter.

When asked what the choice of news will be, Thunberg promised "not so many opinion pieces and disaster descriptions", but rather many "reviews that show what reality looks like, where we are right now, and which profoundly explain the climate crisis, as well as interviews with people who have a lot of knowledge, such as researchers".

Viral
Greta Thunberg Bursts Into US Presidential Race by Endorsing Joe Biden
Wolodarski admitted that while there is a legitimate risk Dagens Nyheter's independence may be compromised by an outsider, it will nonetheless be clear to readers that it is a special journalistic project for a single day.

"Greta Thunberg will work together with a group of editors at Dagens Nyheter on concrete ideas, and the journalistic work will be conducted according to current professional routines. We will report very openly how everything goes", Wolodarski explained.

He described this stunt as "part of a larger effort to evaluate the climate issue journalistically" and pledged to devote more resources to reporting on climate issues in everyday life.

"We want to be inspired by this and treat the climate crisis as the crucial issue it is. It affects us, our children, and our grandchildren", he underscored.

Greta Thunberg herself hoped that Dagens Nyheter and other media outlets will draw inspiration and "be influenced" by her role as media boss.

"I hope that this can influence Dagens Nyheter and other media to treat the climate crisis as the big crisis it actually is", Greta Thunberg said.

This is not the first time a well-known public figure has acted as a guest editor of a newspaper. Arguably the most notable case is when Irish rock group U2's frontman Bono edited the British newspaper The Independent for a day in 2006. The front page said "No news today" and was devoted to the AIDS epidemic in Africa.

Teenage climate activist Greta Thunberg propelled to international fame in 2018 as a 15-year-old after inspiring an international school strike movement, first by her solitary protests outside the Swedish parliament and then worldwide, encouraging fellow schoolkids to skip school and demand more resolute climate action from their respective governments.

Ever since, she has been basking in trophies, prizes, and accolades and enjoyed the media's undivided attention, appearing on numerous front pages.

'The Person I Am': Greta Thunberg Hails Her Portrayal in New Docu as 'Shy, Nerdy' Girl
In her famous "How dare you" speech that vent viral during the UN General Assembly in New York, then-16-year-old Thunberg, an autistic daughter of famous opera singer Malena Ernman, accused world leaders of "stealing her childhood and her dreams".

None of her attacks, however, barred her from rubbing shoulders with celebrities and politicians of the highest calibre, including Canadian Prime Minister Justin Trudeau and Pope Francis, and film stars turned eco-warriors such as Leonardo DiCaprio and Arnold Schwarzenegger.

However, Greta's phenomenal fame is not without controversy, as numerous critics see her as a manipulated child exploited for the sake of an astroturfing campaign led by the very same politicians she eagerly scalds.

Self-described as "independently liberal", Dagens Nyheter is a major Swedish daily aspiring to extensive domestic and international coverage. It belongs to the powerful Bonnier family, which runs over a hundred media companies in a dozen countries.