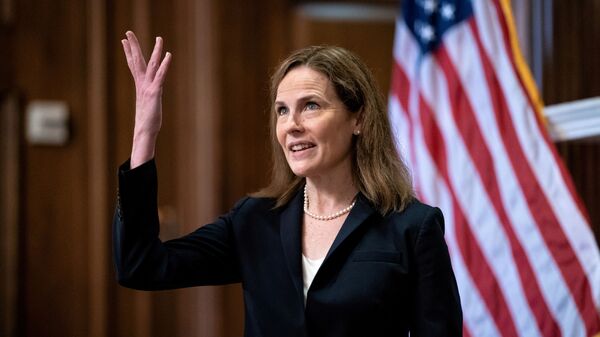 Irina Acheeva
correspondent
All materialsWrite to the author
The GOP-dominated Senate in the US is expected to hold a final vote on Amy Coney Barrett’s nomination as a new conservative justice on 26 October.

Democratic senators refused to show up at the vote in protest against the rush to accept Amy Coney Barrett’s nomination for the Supreme Court seat left vacant by liberal Justice Ruth Bader Ginsburg, who died on 18 September at the age of 87. Instead of attending, Democrats filled their seats in the chamber with pictures of people impacted by the Affordable Care Act, commonly known as Obamacare. The Supreme Court is due to hear arguments in a case involving Obamacare on 10 November.

US President Donald Trump has commented on the matter on Twitter, saying it is a "big day for America".

"Barrett deserves to be on the Supreme Court and she will be confirmed. [Democrats] made a choice not to participate", Senator Lindsey Graham, R-S.C., the committee chairman, said.

Prior to Barrett’s confirmation hearings, Senate Minority Leader Chuck Schumer, D-New York, suggested that Democrats would not provide a quorum to make the Judiciary Committee hearing valid, although Republicans are entitled to make procedural changes if such a necessity arises.

"We will not grant this process any further legitimacy by participating in a committee markup of this nomination just 12 days before the culmination of an election that is already underway", Senate Minority Leader Chuck Schumer, D-New York said in a statement Wednesday. He fumed that "the Republican majority is perpetrating the most rushed, most partisan, least legitimate process in the long history of Supreme Court nominations".

Senate Democrats have slammed Barrett’s nomination as "illegitimate", arguing that a Supreme Court pick has never been confirmed so close to an election date.

They have also been accusing Senate Republicans of hypocrisy, bringing up the episode when Mitch McConnell blocked President Barack Obama’s nominee Merrick Garland in 2016, citing an election year and insisting that it’s up to voters to decide. Yet, Senate Republicans argue that the situation is totally different because the same party currently controls the White House and the Senate.

In their campaign against the 48-year-old Barrett, Democrats have focused on the Affordable Care Act, arguing that the judge’s nomination presents a threat to the 2010 healthcare law. Before she became a federal judge, Barrett chastised Chief Justice John Roberts’ ruling supporting the law.

The Democrats claim her nomination is specifically tailored to the upcoming move by the Supreme Court to hear oral arguments in the Trump administration’s legal challenge to Obamacare on 10 November, just a week after the 3 November presidential poll.

During her confirmation hearing, Barrett, currently a judge on the 7th Circuit Court of Appeals, argued that she was not on a “mission to destroy the Affordable Care Act” and Senate Republicans argued that claims she would strike down the law are too far-fetched. She also stressed that the only principles that would underly her work is the letter of law.

Separately, she landed in some senators' crosshairs as she declined to weigh in on whether the landmark Roe v. Wade abortion ruling is a so-called "super precedent'' of the court or whether the president could unilaterally change the date set in law for the election.

On Wednesday, McConnell slammed a story from The Associated Press that focused on Barrett's role on the board of trustees of a Christian school with anti-gay policies toward students and staffers.

McConnell noted that Barrett had already disclosed her work with the school to the Senate and "has taken the same oath of impartiality as every other federal judge, and has affirmed over and over that her legal judgment is independent from her private opinions.'' Republicans eagerly dwelled on Barrett's Catholic faith, portraying her as a genuine role model for conservative and religious women.