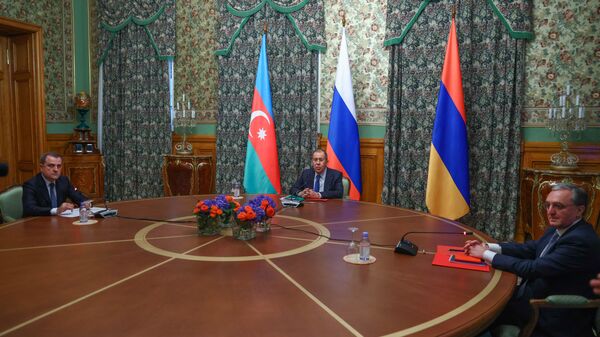 Evgeny Mikhaylov
All materialsWrite to the author
Moscow is trying to put the situation in Nagorno-Karabakh onto a diplomatic track and does not see any alternative to a peaceful solution, Russian presidential spokesman Dmitry Peskov said Thursday.

"Russia has been doing everything in its power to steer the current situation onto the political and diplomatic track. We are still convinced that this problem can only have a peaceful solution", Peskov told reporters.

He also noted with regret that Armenia and Azerbaijan were not compliant with the agreements on a Karabakh ceasefire, reached in Moscow earlier this month.

"Unfortunately, it cannot be said yet that they’re fulfiling the previously reached agreements about the ceasefire and a humanitarian pause. Unfortunately, the sides are not compliant”, Peskov told reporters, commenting on Oktay's statement. 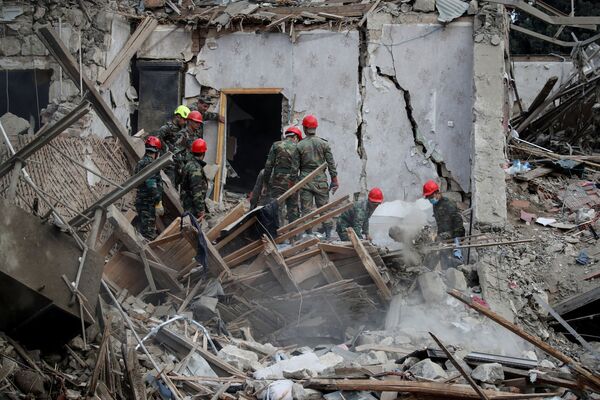 Search and rescue teams work on the blast site hit by a rocket during the fighting over the breakaway region of Nagorno-Karabakh in the city of Ganja, Azerbaijan October 11, 2020.
© REUTERS / UMIT BEKTAS

"As for third nations' engagement in the existing formats of crisis settlement, this depends fully on the political will of the sides to the conflict. There are two sides to the conflict, Azerbaijan and Armenia. Engagement in conflict resolution, mediation, and participation in the formats is only possible with the consent of the two sides”, the Kremlin spokesman went on to say.

The statement comes as a response after Turkish Vice President Fuat Oktay claimed earlier this week that Russia could not resolve the hostilities in Karabakh and engagement from Ankara was therefore needed. At the same time, the Turkish official stated that his country is ready to deploy military if Baku asks for assistance.

The fighting on the contact line in Karabakh began on 27 September, as both Azerbaijan and Armenia accused each other of aggression.

The conflict in Nagorno-Karabakh flared up in the 1980s and resulted in the Nagorno-Karabakh Autonomous Region announcing its secession from Azerbaijan in 1991. During the subsequent war between Baku and Yerevan (1992-1994), Azerbaijan lost control of the self-proclaimed republic and areas adjacent to it. Since 1992, talks have been ongoing for a peaceful resolution of the conflict with the mediation of the OSCE Minsk Group, led by Russia, the US, and France.