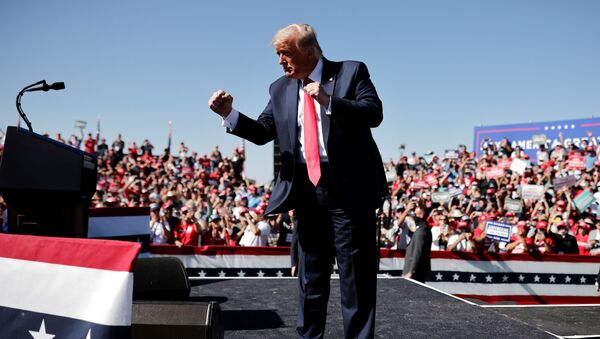 Ekaterina Blinova
All materialsWrite to the author
Donald Trump is likely to win a minimum of 270 Electoral College votes or even more, the Trafalgar Group's Robert Cahaly predicted on Wednesday. US observers have discussed the possibility of the incumbent president wining amid mainstream media claims that Joe Biden's victory is a done deal.

While Democratic presidential nominee Joe Biden is still leading in US national surveys by a large margin, the Trafalgar Group, an Atlanta-based political polling and survey company, suggests that many American pollsters "are predominantly missing the hidden Trump vote" since many conservatives and the president's supporters are scared of openly endorsing Donald Trump.

In 2016, the Trafalgar Group accurately predicted Donald Trump’s victory in Pennsylvania, Florida, and Michigan, despite the majority of national studies indicating that Hillary Clinton had a strong lead in the states.

"Conservatives keep their pro-Trump views to themselves for good reason", says Dr Nicholas Waddy, associate professor of history at SUNY Alfred. "This has become a society in which Trump supporters can be fired, insulted, bullied, shamed, and sometimes even assaulted, often with impunity. No wonder Trump supporters keep a low profile".

Masked violent far-left militants attack conservatives at a small San Francisco gathering yesterday against Big Tech. Philip Anderson (@TeamSaveAmerica) had his teeth knocked out in an unprovoked punch to the mouth. pic.twitter.com/8lX6bLepFd

​Although CNN, The New York Times, and other mainstream media sources are trumpeting defeat for the incumbent president in the upcoming election based on pollster data, the situation evokes strong memories of the 2016 presidential race in which Hillary Clinton was regarded as a certain winner, according to the professor.

"The battleground state polls look almost exactly the same as they did in the last presidential election: the Democrat enjoys small leads, usually within the margin of error", he notes.

Yesterday, antifa & left-wing protesters in Boston burned a Trump flag and one person poured fake blood on himself in occult-like ceremony. Video by @FordFischer: pic.twitter.com/iL8904UhiC

​Still, this year the situation is exacerbated by the coronavirus pandemic, riots, and the prevalence of mail-in voting, which make some people doubt the reliability of the mainstream media polls: "Many Republicans loathe the media, and it should come as no surprise that they want no part of a CNN poll", Waddy remarks. "The last such poll put Biden ahead by 16 points nationally".

"Of course, none of this means that Trafalgar, which predicts a narrow Trump win in most swing states, is right", he says. "Every election means a different electorate, and this year's electorate will be different-er than most! Nonetheless, we should take Trafalgar's prediction seriously, given their track record, and we should note that prediction markets give Trump a much better chance of victory than pollsters: closer to 40%. My advice to Democrats, then, is to take nothing for granted". 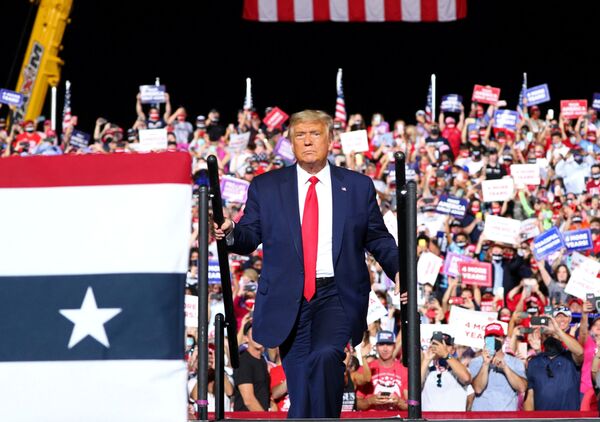 The unfolding situation is quite symptomatic for the current political situation in the United States, according to Daniel McAdams, executive director of the Ron Paul Institute for Peace and Prosperity.

"President Trump has been one of the most divisive political figures in decades", McAdams highlights. "His bombastic style has embarrassed many of his allies and infuriated his enemies. Many Americans are hesitant to openly embrace such a divisive figure for fear of alienating friends and family. They may be even hesitant to tell pollsters who they support for fear of that information getting out. That is why many suspect that the polls may be seriously underestimating support for Trump".

There is a set of factors which may hint at growing support for Donald Trump that national surveys are unable to detect, the think tank director believes.

I am not just running against Biden, I am running against the Corrupt Media, the Big Tech Giants, and the Washington Swamp. It is time to send a message to these wealthy liberal hypocrites by delivering Joe Biden a THUNDERING defeat on November 3rd! #MAGA https://t.co/gsFSgh2KPc pic.twitter.com/eRRgjnhyIi

​In terms of public enthusiasm for candidates, Trump's recent rallies bring large crowds, while the Biden campaign cannot boast anything of the kind, according to McAdams: "2020 is virtually a carbon copy of the 2016 campaign, where Hillary Clinton had trouble filling a small room with supporters while Trump held rallies in stadiums", he says, adding that Trump's supporters in 2020 show even more enthusiasm, being happy to go out after protracted and exhausting lockdowns.

"To the extent that Trump is credited for helping return those normal things to life, he should be expected to benefit at the ballot box", he says.

Furthermore, the president "has repeatedly made a point of distinguishing himself from Biden on the issue of coronavirus", warning that Biden "would lock the economy back down and order a national mask mandate", while he, Trump, "would focus on re-opening the economy and rebuilding from the lockdown-related recession/depression", McAdams points out.

This message especially resonates with blue collar workers in battleground states, according to the think tank director: those who cannot "work from home" will likely be more motivated to vote for the incumbent president in the hope that they may return to their jobs.

"Many of those workers may have been unenthused about Trump for various reasons, but when it looks like a matter of life or death they may get out in force", McAdams says. "Biden may live to regret casting himself as the 'lockdown' candidate".