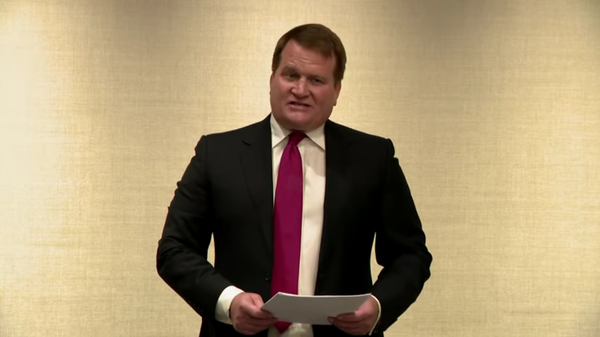 "I am making this statement to set the record straight about the involvement of the Biden family - Vice President [Joe] Biden, his brother Jim Biden, and his son Hunter Biden - in dealings with the Chinese," Bobulinski said Thursday evening in a statement to the White House press pool.

Bobulinski, who is CEO of Sinohawk Holdings, a business partnership between CEFC China Energy and the Biden family, said Joe Biden's claim that he has never discussed business with his son is "false."

He said that at a May 2, 2017, meeting, he discussed with Joe Biden "the Bidens' business plans with the Chinese," for more than an hour, with which he says the former US vice president was "plainly familiar at least at a high level."

He furnished three cell phones and a collection of emails he said spanned the years of their business involvement.

"The evidence sits on these three phones. I don’t want to go into anything any further," Bobulinski said, noting the evidence would be discussed with Sen. Ron Johnson (R-WI), who chairs the Senate Homeland Security and Governmental Affairs Committee. "The American people can decide what’s fact."

When asked by the reporters present who paid for him to make the statement, he told them, "I paid for myself."

Bobulinski told the New York Post for a Thursday story that he was one of the recipients of an email from Hunter Biden the outlet had published eight days earlier after being found on a laptop supposedly left by Hunter Biden at a repair store and never picked up.

That email blew the lid off Joe Biden's longstanding claim that he had never been involved in Hunter's business dealings - accusations which began in connection with Hunter's appointment to the board of Burisma, a gas company doing business in Ukraine in the wake of the US-backed coup in Kiev that Joe Biden helped manage the aftermath of in 2014 while US vice president, and Joe Biden's subsequent push for the Ukrainian prosecutor looking into Burisma to be fired.

In response to Bobulinski's statement, Joe Biden's 2020 presidential campaign said, "Joe Biden has never even considered being involved in business with his family, nor in any overseas business whatsoever. He has never held stock in any such business arrangements nor has any family member or any other person ever held stock for him."

​"What is true is that Tony Bobulinski admitted on the record to Breitbart that he is angry he was *not* able to go into business with Hunter and James Biden," the statement continued, calling Bobulinski statement "a desperate, pathetic farce executed by a flailing campaign with no rationale for putting our country through another four years of hell."