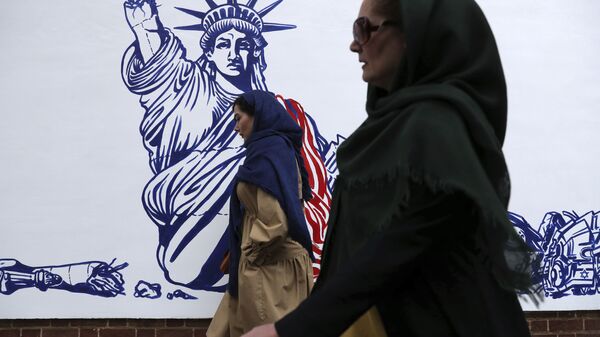 TEHRAN (Sputnik) - Any US attempt to impose unilateral restrictions on Iran would breach the international law and be bound to fail, the Iranian Foreign Ministry's spokesman, Saeed Khatibzadeh, said in an interview, qualifying Washington as "sanctions-addicted".

"The sanctions-addicted United States is not far to once again compensate for some of its blatant failures in the [United Nations] Security Council and its inability to reimpose previous sanctions that ended following the nuclear agreement and the UNSC 2231 Resolution", Khatibzadeh said.

"It is clear that any US attempt to introduce its unilateral steps [sanctions] violates international law and is doomed to fail", the spokesman added.

The statement comes after the Iranian Foreign Ministry said in reference to the UN Security Council resolution 2231 that all restrictions on the transfer of arms to Iran ended. US Secretary of State Mike Pompeo responded by saying that the United States was ready to sanction any individual or entity that supplied conventional arms to Iran.

Foreign Ministry Spokesman Saeed Khatibzadeh further elaborated that Iran considers Russia as one of its main partners in the military and defence field, noting that the two countries can boost partnership as the UN arms embargo imposed on Tehran is now lifted.

"Over recent years, Russia has been one of Iran’s main partners in the defence and military fields. Now, with the lifting of arms restrictions, the two countries can enhance the prospects for military cooperation", Khatibzadeh said.

"Negotiations between Tehran and Moscow are ongoing within the framework of a joint commission for military cooperation. Partnership programmes between the two countries’ authorities are developed through it, including those related to regional and international issues", the spokesman added.

Any arms purchase from "friendly countries" will depend on the basic needs of Iran, the spokesman said emphasizing that Tehran can obtain any kind of weapons and necessary equipment — "from any source" — without legal restrictions and only on the basis of its defence needs.

World
Beijing Calls US Threats to Impose Sanctions Over Arms Supply to Iran Senseless
The US proposed prolonging the arms ban in the UN Security Council on 14 August 2020, but the proposition was declined. Consequently, Iran is now able to procure any arms without restrictions.

On 14 July 2015, Iran, Russia, China, the US, Great Britain, Germany and France signed settlement agreements for the Iranian nuclear programme. The Joint Comprehensive Plan of Action (JCPOA) came into force on 18 October 2015, and, according to its provisions, sanctions were imposed on Iran, one of which banned conventional weapon sales to Iran for five years.

Tehran Does Not Favour Any US Presidential Candidate

Saeed Khatibzadeh continued on by saying that Iran does not favour any US presidential candidate and sees the upcoming vote as an internal matter for Washington.

"Tehran has repeatedly announced in regard with the outcome of the US presidential election that it does not prefer one candidate over another and considers this issue as an internal matter", Khatibzadeh said.

US voters will cast their ballots on 3 November to choose between US President Donald Trump and Democratic presidential candidate Joe Biden.

Khatibzadeh also expressed the belief that Riyadh was provoking regional tensions and giving its resources to the US presidential administration, but noted that Tehran would still welcome the neighbour "with open arms" if it changed its policy.

"Unfortunately, Riyadh has given its prestige and resources to the [US President Donald] Trump administration and has taken the wrong path provoking war, bloodshed and imposing a blockade on the regional countries, including Yemen and Qatar", Khatibzadeh said.

"In the case if Riyadh takes the decision to ease tensions in the region and moves forward in this direction, Iran will welcome it with open arms", the spokesman added.

Saudi Arabia and Iran broke off diplomatic relations in 2016 after the Saudi authorities executed a prominent Shia cleric. The execution prompted a wave of protests in Tehran that led to the Saudi embassy being overrun and ransacked.