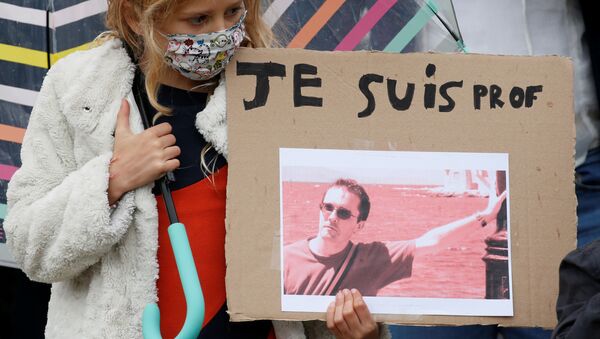 Igor Kuznetsov
All materials
The brutal slaughter of French teacher Samuel Paty has shocked France and sent a ripple effect through Europe.

Following the killing of French teacher Samuel Paty, who was beheaded for showing controversial cartoons of Prophet Muhammad to his pupils, Swedish teachers have emphasised the importance of freedom of expression in teaching, but also voiced concern that similar attacks may occur in Sweden as well, national broadcaster SVT reported.
The assassination of Paty has been condemned across the world, and Swedish teachers are also mourning their deceased colleague.

According to Olof Linton, high school teacher at Östra Real in Stockholm, the killing was an attack on freedom of expression and democratic society, and could have happened anywhere in Europe, including Sweden.

“Unfortunately I think that this is something that we must see as an actual risk even in Swedish schools and contexts. Also, attacks could come from Islamist or right-wing extremists. And we must be prepared for that to happen. It is not a question of if, but when,” he told SVT.

Linton called for a clear signal of condemnation from the government, school and society at large. According to him, addressing controversial topics may include offensive material being shown.

“It's very important for teachers to keep them in the process of teaching. We cannot bow to extremist and fundamentalist beliefs,” Linton said.

Charlotta Hemlin, a teacher at Westerlundska High School in Enköping, also stressed the importance of debating the freedom of expression.

“School is a part of society, and society is becoming increasingly polarised. Then it is even more important for us at school to take up this particular discussion and other difficult ones,” Hemlin told SVT.

Gothenburg high school teacher Mattias Axelsson said that the killing of a teacher for of his professional practice made him angry and sad at the same time.

“There is no end in itself to provoke and offend. If I feel that I reach a higher purpose, increased learning or better understanding, then I should definitely be able to show a Muhammad caricature or someone who burns a Swedish flag,” Axelsson stressed.

According to Christer Mattsson, a researcher at the University of Gothenburg, arranging theme days on controversial topics, such as sexuality, racism, the freedom of speech or the Holocaust, is a mistake, as it may be directly counterproductive by reinforcing negative opinions and biases. Students with, say, anti-Semitic views may become reinforced in their beliefs if put in a situation that is confrontational to them, he told SVT.

The Killing of Samuel Paty

47-year-old Samuel Paty, a teacher from Conflans-Sainte-Honorine school in the northwest of Paris, was beheaded on 16 October by a 18-year-old Muslim of Chechen origin Aboulakh Anzorov, whose family arrived in France amid an anti-terrorist operation in Russia's North Caucasus in the 2000s, and had obtained refugee status.

The attack is believed to have been inspired by Paty’s freedom of speech class, where he had shown cartoons of the Islamic Prophet Mohammed. Online campaigns against the teacher were launched and one Islamist preacher reportedly issued a fatwa against him. A graphic photograph of the decapitated French teacher was published in the latest issue of an online magazine allegedly run by Daesh* supporters in India.

Depictions of Prophet Muhammad can stir serious offence among Muslims because Islamic tradition explicitly forbids images of Muhammad and Allah. In recent years, this issue has become particularly sensitive following the “Cartoon Gate” involving the Danish newspaper Jyllands-Posten and the infamous publishing of cartoons of Prophet Muhammad by the satirical magazine Charlie Hebdo, which ended in brutal bloodshed by Islamist extremists.

In Scandinavia, which has a sizable Muslim community, altercations between proponents of free speech and adherents of hardline Islam are not uncommon either. For instance, Danish politician Rasmus Paludan has been repeatedly attacked for his practice of burning the Quran in celebration of free speech. Danish artist Kurt Westergaard and Swedish artist Lars Vilks have suffered several assassination attempts due to their respective cartoons of Prophet Muhammad.

A comprehensive 2012 study conducted by the Swedish Schools Inspectorate, shows that many teachers feel insecure in their professional life.

Daesh (ISIS, ISIL, “Islamic State”) is a terrorist organisation banned in Russia and others