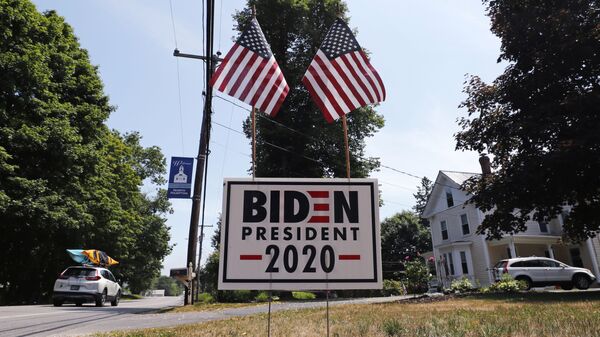 © AP Photo / Charles Krupa
Subscribe
International
India
Africa
Andrei Dergalin
All materialsWrite to the author
The suspect faces “multiple assault and reckless endangerment charges and a felony firearm charge”, which may land him with up to 100 years in prison if he gets convicted.

A 50-year-old resident of Kingsville, Maryland named Douglas Kuhn was arrested by police for allegedly shooting at "Trump supporters" who were driving by his house in a pickup truck, local CBS affiliate WJZ-TV reports.

According to the media outlet, Kuhn was installing a sign at his property when Neal Houk and his son drove by and honked their horn at him,

"He reached down. He had a shotgun right there, pulled it out and pointed it right at us," Houk said. "And we were in disbelief. Next thing we heard was a shotgun blast."

The shooting was reportedly corroborated by a neighbour who did not see it but who heard it and "it was indistinguishable that it was a shotgun".

Although no one was hurt in the incident, the police has taken Kuhn into custody, and he now reportedly faces "multiple assault and reckless endangerment charges and a felony firearm charge".

It wasn't immediately clear what sign Kuhn was installing at the time of the incident; WJZ-TV said it was a "Black Lives Matter" sign but Fox-affiliated WBFF said Kuhn, whom the channel described as a "Biden supporter", was putting up a "campaign sign".

WBFF also added that several neighbours said this is "not the first issue involving signs on Kuhn’s property" and described "multiple instances where 'Biden-Harris 2020' and ‘Black Lives Matter’ signs would go up and come down in a matter of days".

"The 'Black Lives Matter' sign was down and one of the Biden signs was down - they’re flags that were torn down," said David Franz who has lived in the neighbourhood for 35 years.

If convicted, Kuhn could face up to 100 years in prison, but his victim is reported to have said that he doesn't want the former to face this kind of punishment.