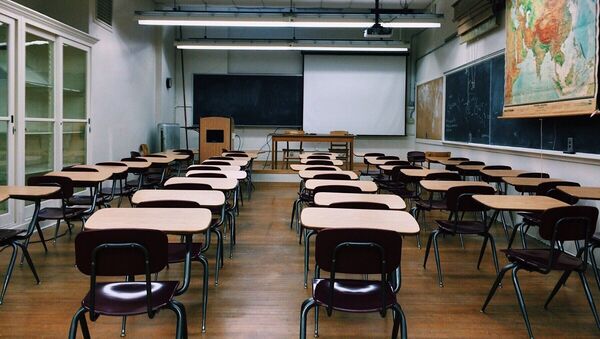 CC0 / /
Subscribe
International
India
Africa
PragerU is a non-profit media organisation that produces conservative content in the form of videos and faux-educational material. While it is not an accredited academic institution, it has stared a variety of key commentators from the right of the political spectrum.

The PragerU videos — some of which use titles such as 'Build the Wall', 'Why the Right Was Right', 'Why America's Military Must Be Strong', and 'The Left Ruins Everything' — were given to a 10th-grade history class as part of assignments in Maumee High School, along with questions surrounding the contents “most important messages".

Andrea Cutway, a mother of a 16-year-old student at the school highlighted the work project to the Maumee City School administrators and removed her daughter from the class immediately.

The school removed the materials from the syllabus following an inquiry by Huffpost, said Todd Cramer, superintendent of Maumee City Schools, according to the outlet.

The teacher’s class website shows that the student had been assigned a series of videos from the channel throughout the year including: 'There Is No Gender Wage Gap', 'How to Steal an Election: Mail-In Ballots', and 'Is Islam a Religion of Peace?'.

​This comes as PragerU’s launched its PragerU Educators and Parents (PREP) scheme, which has the intended aim of combating "leftist propaganda" in schools and for children to share "conservative values".

“2,000 parents and educators have already signed up for PREP", said chief marketing officer of PragerU Craig Strazzeri in an email seen by Huffpost.

“We constantly hear from educators and teachers who use our videos in the classroom,” Strazzeri said while not revealing the number of public school teachers involved in the program.

He added that "ideally, every school in America would show PragerU videos in the classroom on a regular basis to help educate the next generation".

Adrienne Johnson, PragerU’s chief of staff and lead of the PREP platform, revealed in a video interview with One America News Network that the program was initiated amid schools closures during the COVID-19 pandemic which “forced us to take a closer look at what is being taught and not taught across the country,”

“America is not being fairly portrayed. Many schools are implementing anti-racist Black Lives Matter curriculum and The 1619 Project", Johnson said, in reference to an initiative that highlights the first year when enslaved Africans arrived in America.

PragerU itself presents as a university-style format. In one of their videos entitled 'Welcome: Prager University', founder Dennis Prager describes the Youtube videos presented by "some of the best minds in the world" as "courses".

Videos come with 'Study Guides' with sections to be filled in during and after watching, discussion and review questions, and quizzes.

PREP has compiled the guides into 2019 and 2020 annual booklets complete with semesters and subjects: economics, foreign affairs, and history.

One guide called 'The Market Will Set You Free' includes questions like 'What is considered the best measurement of a country’s standard of living?' and 'Why is capitalism so much better for everyone than socialism is?'

The organization is funded via donations, primarily from hydraulic fracking billionaire brothers Dan and Farris Wilks, who also sits on PragerU's board.

This follows a wider national campaign by the Trump Administration to promote "pro-American" material in the US school system.

​In September, President Trump blasted "left-wing indoctrination" in education. Earlier the same month, he threatened to stop federal funding for schools using the 1619 Project in the classroom, despite the Every Student Succeeds Act prohibiting the federal government from sanctioning individual institutions for their curriculum.