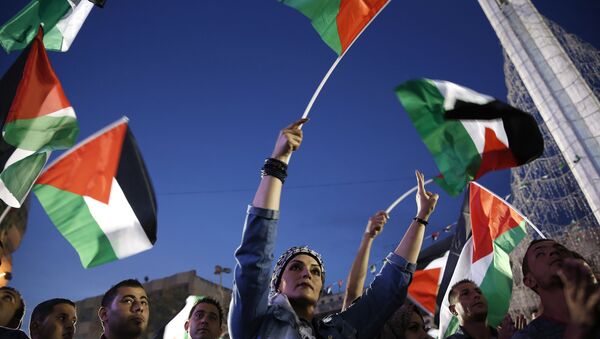 © AFP 2023 / ABBAS MOMANI
Subscribe
International
India
Africa
Elizabeth Blade
All materials
The PA has seen a significant drop in funding in 2020, primarily due to the fact that donors are tiring of the lack of progress in peace talks with Israel, the inability of factions to come to terms with one another and the alleged incitement in Palestinian textbooks.

2020 has been a financially challenging year for the Palestinians. First, it was the coronavirus that damaged the already-ailing Palestinian economy, widening the circles of poverty and unemployment in the West Bank and Gaza.

Then it was Israel's plan to extend sovereignty over parts of the West Bank, a move that damaged the cooperation between the Jewish state and the PA and that resulted in Ramallah's decision to reject the acceptance of tax revenues collected for the Palestinians.

And finally it was the deals reached between Israel, the United Arab Emirates and Bahrain that dealt the Palestinians a severe diplomatic blow and that now threaten to claim a financial toll too.

In September, two weeks after the announcement of the normalisation agreements, Palestinian President Mahmoud Abbas confirmed that the PA no longer gets the funds it was used to receiving.

If in the first seven months of 2019 the PA has received some $267 million from the rich Gulf states, 2020 saw a significant drop in that funding, with the Arab nations pledging only $38 million to the Palestinians, a stark drop of 85 percent.

Although some experts pinned the blame on budget trimming, as the raging coronavirus has affected many economies around the world, including in the Gulf amid falling oil prices, Nidal Foqaha, Director General of the Palestinian Peace Coalition-Geneva Initiative in Ramallah, says the decision has also been politically motivated.

"The Arab nations started to hold the Palestinians responsible for the lack of progress in the Middle East peace process, and that failure eventually led to their reduced commitment [to the funding of the PA]".

Foqaha's claims are not far-fetched, and in April a senior Saudi official, who spoke to Sputnik on condition of anonymity, confirmed that his country was "tired" of pouring billions of dollars into the Palestinian cause and receiving nothing in return.

Tired of Israeli-Palestinian Conflict, Riyadh 'to Press' Sides to 'Take or Leave' Trump's Peace Deal
However, the Gulf states were far from the only players who were taken aback by the lack of progress on the peace front, and Foqaha says the European Union "wanted to see different political results for the money it paid" and has also been bothered by the stalled negotiations process.

But that wasn't their only frustration. "Apart from the fact that the European states have suffered losses because of the pandemic, they were also concerned about the lack of a united front among the Palestinians [something that impacted their willingness to transfer the cash - ed.]"

And there was another reason too - alleged incitement in the Palestinian curriculum that despite promises made by top PA officials continued to reflect hateful attitudes towards Israel and the Jewish people.

Recently, it was reported that over 20 members of the European Parliament had called on the continental organisation to withhold the money it was giving the Palestinian Authority, which failed to embrace a change of attitude in its school textbooks, whereas in the beginning of the month, the EU has allegedly warned the PA it would end its support it if it kept refusing to receive tax revenues collected by Israel.

If these reports are accurate, and the EU ends up keeping its promise, it would deal a devastating blow to the Palestinians, who have been relying on European funds for years.

In 2018 alone, Palestinians received more than $180 million in direct financial assistance, in addition to millions that have been transferred to them to support productive investments and the UNRWA, a UN agency that assists Palestinian refugees.

Now that these and other funds are being called into question, and some have already been cut off, Palestinians are already feeling the burden. In recent months, the debt of the PA has climbed, prompting Ramallah to ask for loans from Israel and international donors, and Foqaha says his government "was struggling to fulfil their obligations in front of its employees".

Palestinian Curriculum Won't Embrace Israel Unless It Moves Away From Violations, Says PA Official
Already in July, the PA announced that the government would only pay 50 percent of salaries to its employees, explaining the decision by citing a drop in cash injections.

Cuts have also been made in the Gaza Strip, where the PA fired thousands of its employees and trimmed the salaries of many others.

The problem is, says the expert, that the PA has no real alternatives to the funds that have been reduced and he calls on the Palestinian leadership of all factions to put differences aside for the sake of their cause.

"Unless there is a change in the political landscape, it will be difficult to restore the financial commitment the PA used to have, whether from the side of Europe or from Arab countries," Foqaha said, adding that cash injections might be renewed with the resumption of the stalled peace process.

At the same time, he is also certain that Palestinians should not be solely reliant on the donations of international sponsors.

"We should focus on our internal resources, open new opportunities and, most importantly, fix and enhance our own institutional system," Foqaha concluded.