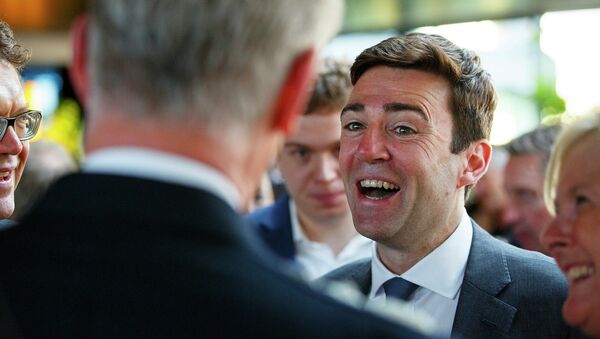 Westminster has been embroiled in a dispute with local Greater Manchester authorities over funding required to protect business as the government threatens to introduce Tier 3 lockdown restrictions as coronavirus cases rise in the region.

Greater Manchester will be placed under England's Tier 3 coronavirus restrictions - the highest level - from Friday at 00:01 BST, Boris Johnson announced on Tuesday.

During a national address, Boris Johnson said "not to act now" would endanger the lives of more Manchester residents due to rapidly rising cases of the disease.

He claimed that that the government has offered "generous" financial support to the region, which had been refused by Mayor Andy Burnham.

Johnson said that he does "regret" the decision and said that the UK would have a "better chance of defeating the virus if we work together".

He added that Greater Manchester would be given £22m in funding as part of a "comprehensive package of support" but the "door was open to continue the conversation" so long as the number was consistent with other areas facing similar outbreaks.

The Prime Minister also confirmed that talks with South Yorkshire, West Yorkshire, Nottinghamshire and the North East authorities were ongoing regarding the possibility of Tier 3 restrictions being introduced in those regions.

Boris Johnson announced £22m will be handed to the region to cover test and trace and enforcement.

The prime minister says the government 'couldn't do a deal with Greater Manchester that would be out of kilter' from other regions.

​The government refused to meet the Greater Manchester Mayor's demands for £65 million to provide an 80% furlough wage necessary to protect the livelihoods of those in the region as pubs, bars, bookmakers, and other firms will be closed under the new restrictions.

Mayor Burnham described the £65 million demand as the "bare minimum to prevent a winter of real hardship" over a "punishing" winter.

Mr Burnham added that the government's offer was not sufficient to "protect the poorest people in our communities".

"At no point today were we offered enough to protect the poorest people in our communities through the punishing reality of the winter to come", he said.

"Even now, I am still willing to do a deal but it cannot be on the terms that the Government offered today/

Prior to the Downing Street press conference, Mr Burnham - addressing the public with local leaders - said without the £65 million in support, the new rules "would be certain to increase levels of poverty, homelessness and hardship".

Quite a moment as Andy Burnham is shown the government’s £22 million offer on live TV. pic.twitter.com/yN8VnNlDJb

​Tier 3 rules are currently only in force in Lancashire and the Liverpool City Region which has seen pubs and bars not serving full meals shut. Mixing is banned both indoors and outdoors, and there are rules surrounding travel into an out of the area.

Rules enforce on Greater Manchester limit pubs and restaurants to a 22:00 closing time, prohibits household mixing indoors and meetings of 6 are limited when outdoors.