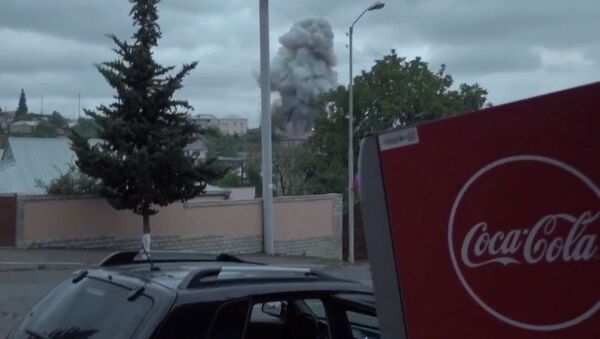 No air raid sirens and no explosions were heard in the capital of the unrecognised Republic of Artsakh (Republic of Nagorno-Karabakh) during the night or in the early hours of Tuesday, a Sputnik correspondent reports.

The foreign minister of the unrecognised Nagorno-Karabakh Republic (NKR), Masis Mayilyan, attended a meeting with diplomats of foreign states accredited in Armenia and called on them to recognise the independence of the NKR, the NKR Foreign Ministry said in a statement.

On 9 October, talks were held in Moscow between the foreign ministers of Armenia, Azerbaijan and Russia with the aim of reaching a Nagorno-Karabakh ceasefire agreement.

The Moscow meeting resulted in a humanitarian ceasefire that came into force on 10 October but failed to hold. A new truce has since been agreed upon. It came into effect at 20:00 GMT on Saturday, 17 October, but both sides have been reporting violations.

Fighting began on the contact line in Nagorno-Karabakh on 27 September, with Armenia and Azerbaijan accusing each other of unleashing hostilities. Nagorno-Karabakh has repeatedly reported the artillery shelling of peaceful settlements of the unrecognised republic, including its capital, Stepanakert. Armenia has declared martial law and - for the first time - general mobilisation, claiming that Ankara is actively supporting Baku. Partial mobilisation and partial martial law have been introduced in Azerbaijan.

The leaders of Russia, the United States and France called on the opposing sides to end the clashes and to commit themselves to begin negotiations without preconditions. Turkey has stated that it will provide Azerbaijan with any support it requests amid the ongoing aggravation of the situation in Nagorno-Karabakh.

"There were two or three strike forces formed from military formations numbering over 10,000 people, that is, 15,000-16,000, possibly 20,000, including several thousand servicemen of special assault units. Each of them had over 100 tanks, the same number of armored vehicles, 200-300 artillery weapons, including dozens of heavy MLRS," Hovhannisyan said in an interview with the Public Television of Armenia.

He said these strike forces had been unable to break through the defensive lines of the Karabakh Defense Army. Hovhannisyan said that after five to seven days of unsuccessful battles, the Azerbaijani Armed Forces, apparently, concentrated all their forces in the south and began to act by squeezing out.

"But despite the technological advantage, a huge numerical advantage - 12 times in the breakthrough areas - they managed to advance 1-2 kilometers on average per day ... From the point of view of military art, this is disgrace," Hovhannisyan said, adding that support to Baku was provided by the Turkish General Staff with a command and control system, communications, satellites, drones and F-16 fighters.

Earlier, Azerbaijani President Ilham Aliyev said Turkey was in no way involved in the Nagorno-Karabakh conflict, despite all sorts of "rumors and insinuations." According to him, Turkish F-16 fighters are not used in combat operations in Karabakh, they remained in the country after joint military exercises with Turkey.

In his message, he called Turkey "the inspirer and direct participant" of Azerbaijan’s operation in the disputed Armenian-dominated region of Karabakh. According to the president, Ankara is "purposefully trying to carry out the scheme adopted more than one hundred years ago – to erase Armenians as a nation."

"Canada, which is well-aware of the fact and recognized the Armenian Genocide, today too manifested its principled and human nature and suspended Turkey’s export permits for acquisition of military gear. I take this opportunity to express my gratitude to you and the government of Canada for that decision," Sarkissian said, as quoted by his press service.

Ottawa suspended export permits to Turkey in early October amid allegations that Canadian military equipment was being used in the Nagorno-Karabakh conflict zone.

Ankara pledged its "unwavering" support to Azerbaijan since the first day of resumed hostilities in Nagorno-Karabakh. Soon after the conflict reignited in late September, Armenia, Russia and France have expressed their concern over involvement of Middle Eastern militants in the military action. Baku denies both recruitment of militants for fighting in the breakaway region and direct involvement of Turkey in the conflict.

Armenia continues to cooperate with the Collective Security Treaty Organization (CSTO), but has not formally asked for assistance in the settlement of the Nagorno-Karabakh conflict, as its territory has not been attacked directly, Armenian Deputy Foreign Minister Shavarsh Kocharyan said on Tuesday.

"The fact that Armenia has not formally appealed to the CSTO does not mean that we do not work with this organization," Kocharyan said at a press conference when asked why Yerevan had not yet requested support from CSTO allies.

As explained by the diplomat, a condition for Armenia to request CSTO assistance is if its territory is subjected to aggression.

"If Armenia is attacked, we shall notify the UN first and then appeal to the CSTO. There are regulations for all this," Kocharyan added.

Armenia is a member of the CSTO, which also includes Russia, Belarus, Kazakhstan, Kyrgyzstan and Tajikistan. The CSTO charter says that if one member state gets attacked, all other member states shall immediately provide it with the necessary assistance — including militarily — if requested.

The long-lasting Nagorno-Karabakh conflict, the beginning of which dates back to 1988, faced a fresh escalation on September 27. Armenia and Azerbaijan have accused each other of starting the military action. Reports indicate that civilians in Nagorno-Karabakh are bearing the brunt of artillery shelling.

Armenia has declared martial law and called for a general mobilization, while Azerbaijan has announced partial mobilization and partial martial law. The parties have agreed to two Russian-brokered humanitarian ceasefires, but according to reports, both deals were short-lived.

Russian President Vladimir Putin and his French counterpart Emmanuel Macron discussed the situation in Nagorno-Karabakh in a phone conversation on Tuesday, the Kremlin said.

"The developments in the conflict area at Nagorno-Karabakh were discussed in detail. Vladimir Putin spoke of the steps being taken to prevent further escalation of the combat activities and swift resumption of the talks in order to have a diplomatic and political settlement of the Nagorno-Karabakh issue," the Kremlin said.

The two leaders stressed that they were ready to continue coordinating closely within the OSCE Minsk Group, which is focused on the Karabakh issue, and within the UN Security Council.

In addition, Putin offered Macron his condolences on the recent killing of a French teacher. The two presidents confirmed their interest in boosting cooperation on anti-terrorism.

Russian Deputy Foreign Minister Andrey Rudenko discussed with German Ambassador in Moscow Geza Andreas von Geyr the ongoing hostilities in Nagorno-Karabakh, and the parties confirmed that there was no alternative to the implementation of all provisions of the statement adopted at the end of the recent Moscow meeting between the foreign ministers of Russia, Armenia and Azerbaijan the Russian Foreign Ministry said on Tuesday.

The meeting was held at the German ambassador's request.

"A useful exchange of views and assessments of the state of affairs in the CIS space took place, in particular regarding the ongoing hostilities in the zone of the Nagorno-Karabakh conflict. It was confirmed that there was no alternative to the implementation of all the provisions of the statement adopted following the meeting of the foreign ministers of Russia, Azerbaijan and Armenia in Moscow on 10 October", the statement says

The ministry added that the parties had also discussed the situation in Kyrgyzstan and Belarus and the course of the settlement of the internal Ukrainian crisis.

The Armenian Defenсe Ministry said on Tuesday that the Azerbaijani armed forces were retreating from the south of Karabakh, close to the border with Iran.

"In general, work on halting the military clashes and bringing the settlement process to the political and diplomatic format continues", Peskov told reporters.

Azeri armed forces have taken control of the town of Zangilan and several other municipalities in the Karabakh region, President of Azerbaijan Ilham Aliyev said Tuesday.

"A number of villages in the areas of Fizuli, Gebrayil, Khojavend, Zangilan were freed from the occupation ... The town of Zangilan has finally been freed", Aliyev said in his address to the nation.

The Azerbaijani armed forces have destroyed four S-300 missile systems of the Armenian military since the conflict on the contact line in Karabakh flared up, Azerbaijani President Ilham Aliyev said on Tuesday.

"I have mentioned two destroyed S-300 systems in my recent address. Now there are already four", Aliev said in his address to the nation.

Politico has reported recently that Pompeo will receive Armenia's and Azerbaijan's foreign ministers for separate meetings in Washington on Friday. It remains uncertain whether trilateral talks will be held later.