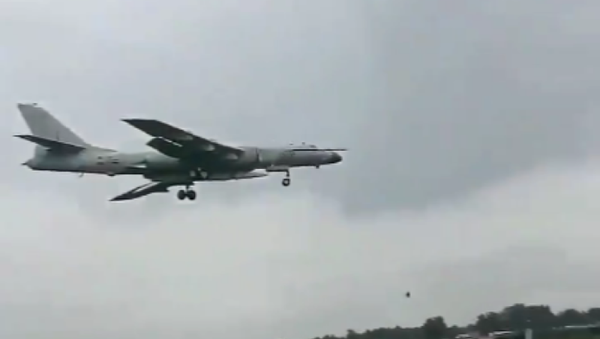 Morgan Artyukhina
All materialsWrite to the author
Video has emerged of a Xian H-6N, China’s new ballistic missile-hauling bomber, carrying what Chinese military insiders said is a new type of hypersonic cruise missile.

Over the weekend, footage of a large H-6N bomber landing at an airfield with a missile slung under its fuselage appeared on social media. While the video would be valuable regardless of the bomber’s armament, since the new variety of H-6 debuted just last year, analysis of the missile soon yielded a startling conclusion: the missile likely has hypersonic capability.

​While military analysts floated a number of possibilities for which hypersonic weapon it could be, two People’s Liberation Army (PLA) insiders anonymously told the South China Morning Post on Monday that it was a hypersonic cruise missile, modified from the slower Changjian missile.

“The Changjian-20 has been around for more than a decade. As other countries are racing to develop more and more advanced defense systems and other hypersonic weapons, it was time for the Chinese air force to have an upgraded missile to boost its attack range,” one of the military sources told the SCMP.

“At present, the attack capability of the Chinese air force is constrained by its bombers. For H-6 bombers, only the H-6N variant is capable of being refueled in the air, resulting in a clear range weakness. This pushed the air force to upgrade its missile to mitigate the range problem,” they continued.

For the first time a H-6N was seen landing with an air-launched Anti-ship ballistic missile (ALBM/AShBM). This missile so far labelled as CH-AS-X-13 is often referred to the DF-21D but here it looks almost to feature an DF-17 like hypersonic glide vehicle (HGV) on top the rocket pic.twitter.com/yOugsjkkhx

​Another PLA source told the publication the weapon is “designed to make up for the shortcomings of other CJ [Changjian] missiles, which are relatively slow, have a shorter range and are less effective in penetrating defense shields. This new missile can match other similar weapons being developed by Russia or the US. But we still need to improve our bombers to unleash its full potential.”

Russia has an operational air-launched hypersonic cruise missile, the Kh-47M2 Kinzhal, and India has tested the supersonic BrahMos cruise missile powered by a ramjet, which could one day yield hypersonic potential, but the United States’ AGM-183 Air-Launched Rapid Response Weapon (ARRW) is still in testing.

According to the Missile Defense Advocacy Alliance (MDAA), the CJ-20 has a range of 3,700 kilometers and is designed to be carried by the H-6K, a more general variant of the H-6N, which is specialized for carrying large weapons such as ballistic and hypersonic missiles. It is unknown whether the hypersonic Changjian missile can carry nuclear warheads like the CJ-20.

​Another variant, the supersonic CJ-100, might have appeared underneath the then-brand-new H-6N at the massive National Day celebrations in 2019, which commemorated the 70th anniversary of the People’s Republic of China’s foundation.

A hypersonic Changjian cruise missile has not been publicly reported on by Western intelligence or analysts. The Pentagon’s annual reports to Congress in the past few years have mentioned the Dongfeng-17, an air-launched ballistic missile (ALBM) that boosts the DZ-ZF hypersonic glide vehicle and which appeared at the 2019 National Day celebrations, and a mysterious weapon called the CH-AS-X-13, rumored to be an ALBM derivative of the Dongfeng-21 medium-range ballistic missile.

As for where the bomber was filmed landing, Defense News has an idea: Rod Lee of the China Aerospace Studies Institute at the Air University on Maxwell Air Force Base, Alabama, told the outlet it was likely Neixiang Ma’ao air base in Henan Province, which houses a nuclear-armed brigade of H-6 bombers.

Dungeon Ambassador from Terra
19 October 2020, 23:01 GMT6
000000
I always approve Chinese products , their military designs are designed brilliantly . I was thinking about the Quad made up of the US , India , Japan and Australia . My advice is to stay clear of the South China , China is ready and waiting for intrusions . Safe navigation is now extinct .