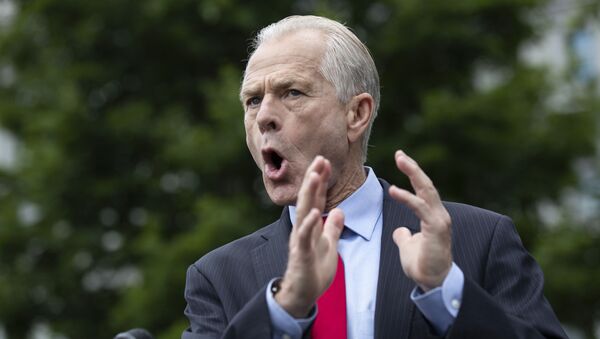 WASHINGTON (Sputnik) - US media outlets, Hollywood moguls, and many basketball players have become China’s useful idiots, according to a Monday statement from White House Trade Advisor Peter Navarro, who encouraged Americans to rise to the occasion and stop fighting among themselves as the 3 November Election Day approaches.

"The New York Times, the Amazon Post [Washington Post], CNN, MSNBC, even outlets once beyond reproach, like 60 Minutes, PBS and Frontline, have devolved into nothing more than attack dogs for the Democratic party and useful idiots for the Chinese Communist Party," Navarro stated.

Navaro added that many players for the National Basketball Association (NBA), as well as Hollywood studio bosses and movie stars, have become "useful idiots" for the Chinese Communist Party, when they engage in self-censorship or release movies that literally airbrushes its abuses, Navarro said.

"These useful idiots in the NBA and Hollywood are not alone in their cowardly self censorship [of] … China's house of human rights horrors. Wall Street hedge fund managers zip their lips to keep the spigot open for a flood of Chinese cash," Navarro said.

The White House trade advisor also took aim at the National Basketball Association (NBA), whose stars have been particularly vocal in their criticism of Trump, as well as of US hedge fund managers and colleges that have relied on Chinese money.

"I'd call on all Americans, and particularly all of America's now useful idiots for the Chinese Communist party, to rise to the most important occasion of our time," Navarro said in a speech ahead of the November 3 presidential election. "[We] have a fight of our lives on our hands and we cannot keep fighting among each other."

The Trump administration has long engaged in a trade war with China, accusing Beijing of stealing US technology and hijacking the country’s industries, among other charges. US President Donald Trump blamed China for the spread of the novel coronavirus around the world and, in particular, the United States.