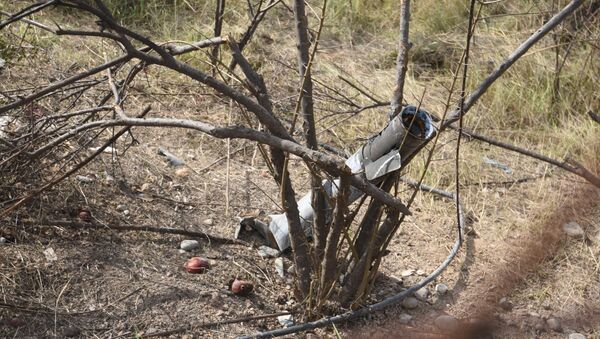 Earlier, Armenian President Armen Sarkissian said that Yerevan will recognise the independence of Nagorno-Karabakh if it sees that Azerbaijan is refusing to comply with agreements made during peaceful negotiations.

Last week, talks were held between the foreign ministers of Armenia, Azerbaijan and Russia with the aim of reaching a Nagorno-Karabakh ceasefire agreement. The Moscow meeting resulted in a humanitarian ceasefire that came into force on 10 October. However, the ceasefire did not hold. A new truce has since been agreed upon. It came into effect at midnight, local time, on Saturday, 17 October (20:00 GMT), but both sides have reported violations.

STEPANAKERT (Sputnik) - No air raid sirens and no explosions were heard in the capital of the unrecognized Republic of Artsakh (Republic of Nagorno-Karabakh) during the night or in the early hours of Tuesday, a Sputnik correspondent reports.

Despite the relatively calm night, Stepanakert residents preferred to hide in the basements.

On Monday, a Sputnik correspondent reported that four explosions were heard near Stepanakert, as well as sounds of artillery fire that subsided towards the evening.

According to spokesperson of the president of the unrecognized Republic of Artsakh, Vahram Poghosyan, fighting continued in the north and south of Nagorno-Karabakh on Monday.

STEPANAKERT (Sputnik) - The foreign minister of the unrecognized Nagorno-Karabakh Republic (NKR), Masis Mayilyan attended a meeting with diplomats of foreign states accredited in Armenia and called on them to recognize the independence of the NKR, the NKR Foreign Ministry said in a statement.

The meeting was held on Monday. The Armenian foreign minister and the rights ombudsmen of Armenia and NKR also took part in it. The list of representatives of diplomatic missions of foreign states has not been specified.

"The foreign minister [of NKR] called an additional threat to regional peace the direct participation of Turkey in the hostilities unleashed by Azerbaijan, including through the deployment and involvement of international armed terrorists in the armed forces of Azerbaijan," the ministry said.

"The foreign minister of Artsakh [NKR] stressed that the international community cannot remain neutral in the issue of the choice between war and peace, as its indifference contributes to the isolation of the people of Artsakh. And this is exactly what Azerbaijan and Turkey are striving for: they regard the isolation of Artsakh as an important element of military confrontation and aggression," it said.

The minister said the civilian population and vital infrastructure were being deliberately attacked. Presenting the current humanitarian situation and the steps taken by the government to resolve it, Mayilyan also emphasized the need for direct assistance to the people of Nagorno-Karabakh on the part of various international organizations.

"The minister called on the international community to recognize the independence of the Republic of Artsakh as an effective measure to end the military aggression unleashed by Azerbaijan, as well as to establish a lasting peace in the region," the Foreign Ministry of the unrecognized republic said.

"Today, in the result of hostilities in the Artsakh [unrecognized Republic of Artsakh, aka Republic of Nagorno-Karabakh]-Azerbaijani conflict zone, the air defense units of the Defense Army shot down 5 enemy UAVs [unmanned aerial vehicles]," Stepanyan wrote on Twitter on Monday.

Armenian Defense Minister Artsrun Hovhannisyan said earlier on Monday that the intensity of fighting in the southern direction of the contact line in the Nagorno-Karabakh region had slightly weakened.

On 9 October, talks were held in Moscow between the foreign ministers of Armenia, Azerbaijan, and Russia with the aim of reaching a Nagorno-Karabakh ceasefire agreement. The Moscow meeting resulted in a humanitarian ceasefire that came into force on 10 October but nonetheless failed to hold. A new truce has since been agreed upon. It came into effect at 20:00 GMT on Saturday, 17 October, but both sides have been reporting violations.

Russian Ambassador to the United Nations Vassily Nebenzia told reporters on Monday that a verification mechanism to ensure compliance with the ceasefire in the Nagorno-Karabakh region was needed, and the issue was currently being discussed.

Earlier on Monday, Armenian Prime Minister Nikol Pashinyan convened the country's Security Council for an emergency meeting to discuss the ongoing confrontation in Nagorno-Karabakh, which started at the end of September.

UNITED NATIONS (Sputnik) - Russian Ambassador to the United Nations Vassily Nebenzia said  a verification mechanism to ensure compliance with ceasefire in the Nagorno-Karabakh region is needed, and the issue is currently being discussed.

Earlier on Monday, the UN Security Council in closed consultations addressed the ongoing conflict between Armenia and Azerbaijan in Nagorno-Karabakh.

"There is a need to ensure verification. I think that's the most pressing issue now. The major question is how to verify the ceasefire, which is being violated," Nebenzia told reporters on Monday. "Who will be there? In what capacity? Who will be actually verifying it? That's still a question. I know it is being discussed."

WASHINGTON (Sputnik) - Secretary of State Mike Pompeo will host his counterparts from the warring post-Soviet republics of Armenia and Azerbaijan in the US capital on Friday, the Politico news site reported.

It is uncertain if Pompeo will arrange a trilateral with Azerbaijan Foreign Minister Jeyhun Bayramov first and Armenia’s Zohrab Mnatsakanyan during their same-day visits, the report said on Monday, citing US government documents.

The development signals the US is deepening efforts to tamp down the resurgent conflict, the report added.

The US, along with Russia and France, co-chairs the so-called Minsk Group, an OSCE-sponsored body which seeks to mediate the Nagorno-Karabakh conflict involving Armenia and Azerbaijan.

YEREVAN (Sputnik) - The intensity of fighting in the southern direction of the contact line in the breakaway region of Nagorno-Karabakh has slightly weakened, Armenian Defense Minister Artsrun Hovhannisyan said on Monday.

"In the morning, the enemy resumed hostilities in the northern and southern directions of the line of contact. After a couple of attacks in the north, it was driven back, heavy fighting continued in the southern direction, but, in general, there were no changes in positions. Now, the intensity of fighting has slightly eased," Hovhannisyan said at a briefing.

The fighting in Nagorno-Karabakh has been ongoing since 27 September. Though the parties have since agreed to two Moscow-brokered humanitarian ceasefires, both were broken mere hours after entering into force. The warring sides have continued to accuse each other of attacks on civilian settlements.

Armenian Prime Minister Nikol Pashinyan has convened the country's Security Council for an emergency meeting to discuss the ongoing conflict in Nagorno-Karabakh, his press service said on Monday.

"The Security Council today held an emergency meeting, chaired by Prime Minister Nikol Pashinyan," the press release read, adding that "the situation in Nagorno-Karabakh following the Azerbaijani-Turkish offensive and the steps to counter the aggression were discussed during the meeting."

The previous extraordinary meeting of Armenia's Security Council was held last Wednesday with a focus on the ongoing armed conflict in Nagorno-Karabakh.

Armed hostilities in Nagorno-Karabakh have been ongoing since September 27. Since then, the parties have agreed to two Russian-brokered humanitarian ceasefires and both were broken mere hours after entering into force. The warring sides have continued to accuse each other of attacks on civilian settlements.

The number of Azerbaijani civilians who died in the Karabakh conflict has risen to 61, the number of injured to 282, the office of the Azerbaijani prosecutor general said Monday.

The decades-long conflict flared up in late September. Armenia backs the self-proclaimed Republic of Nagorno-Karabakh. Azerbaijan insists on maintaining its territorial integrity.

"The Armenian armed forces fired rockets toward the Khizi district, located over 300 kilometers away from the combat area. The rockets were neutralized by the Azerbaijani Army's air defense forces. Some parts of the rockets fell 250 meters away from the strategic oil pipeline Baku-Novorossiysk, passing through the Sitalchay village in the Khizi district," the Azerbaijani Prosecutor General's Office said in a statement.

The Prosecutor General's Office slammed Armenia for putting the crude oil and condensate pipelines in danger. The destruction of the pipeline could have resulted in significant financial damage, the prosecutors stressed.

Russia is raising the issue of mercenaries from Syria and Libya, who are taking part in the Nagrono-Karabakh conflict, in its contacts with Turkey, and stresses that it is unacceptable to get them involved, Deputy Foreign Minister Mikhail Bogdanov said Monday.

"Yes, we are discussing all the issues," the deputy minister told reporters, when asked if this topic was raised at the talks with Ankara.

When asked if Russia said in these contacts that the use of mercenaries in this conflict was unacceptable, Bogdanov said, "It goes without saying, of course."

Turkey has refuted the reports of militants being transported to Karabakh from other countries.

Four explosions were heard near Stepanakert, the capital of the unrecognized Nagorno-Karabakh Republic, a Sputnik correspondent reported on Monday.

No information about the affected targets is available so far. Air raid sirens have not been switched on.

Over 1,000 militants from Syria were deployed to Nagorno-Karabakh last Friday, a source told Sputnik, adding that one more group of mercenaries would soon leave for the conflict-torn region.

"Last Friday, over 1,000 militants [from Syria] were sent to Nagorno-Karabakh to engage in combat operations. Preparations are underway to deploy one more group there in the coming days," the source said.

Azerbaijan resumed artillery shelling in southern and northern parts of Nagorno-Karabakh on Monday morning despite a proclaimed ceasefire, the military of the unrecognized Armenian-majority republic, also known as Artsakh, said.

"The situation was relatively tense on the Artsakh-Azerbaijan line of contact during the night. Artillery fights continued in some areas. In the morning, despite an agreement on a humanitarian ceasefire, enemy forces resumed missile and artillery shelling in the northern and southern directions," the self-proclaimed republic’s military said on Facebook.

Nagorno-Karabakh’s forces are repelling Azerbaijani attacks and controlling the military situation, according to the statement.

Azerbaijani President Ilham Aliyev says his country’s military has taken control of several settlements in the south-western Jabrayil District, along the Nagorno-Karabakh line of contact.

"The armed forces of Azerbaijan have liberated the villages … of the Jabrayil District from occupation," Aliyev wrote on Twitter on Monday morning, accusing Armenia of grossly violating the ceasefire.