US Will Become ‘Sanctuary For Criminals’ if Democrats Win November Vote, Trump Warns 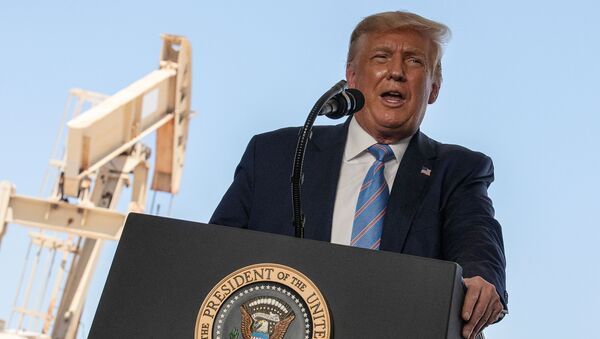 © REUTERS / Carlos Barria
Subscribe
MOSCOW (Sputnik) - US President Donald Trump says the Democrats will turn the country into "one giant sanctuary for criminals" by defunding police and instigating attacks on law enforcement officers.

"If you give the power to Democrats, the radical left will defund, disband, disarm and dismantle police departments all across America. Asked if he [Biden] supports slashing police funding, he said ‘yes, yes, absolutely yes,’" Trump said at a Saturday campaign rally in Janesville, Wisconsin.

Trump pointed to prolonged unrest that Democrat-run states, such as Chicago, New York and Oakland, have been suffering from amid Black Lives Matter protests.

"This year more than 1,000 law enforcement officers have been viciously attacked, nobody talks about that," Trump said, adding that the "anti-police rhetoric of Joe Biden and the Democrat party is really what causes a lot of this, it puts police officers in harm's way. Biden referred to police as ‘the enemy’ and vilified them as an oppressive racist force."

Trump told his supporters in Wisconsin that he did not think his Democratic rival Joe Biden actually believed in what he has said about the police.

"Our law enforcement in this country if you let them do fairly what they do better than anybody in the world, they wouldn't have any problems," Trump said, stressing "as long as I am President we will never defund the police, we will strongly defend our police and I will always stand with the heroes of law enforcement."

Trump warned that the Democrats will take away US citizens’ second amendment rights and turn the entire country into "one giant sanctuary for criminals."

"Biden will appease the rioters and the looters and the anarchists and I’m having them arrested," Trump told his supporters, adding "I want people to be safe."

Protests against police brutality and racism have broken out in primarily Democrat-run cities after the death of George Floyd in police custody in Minneapolis on 25 May. Many of the protests turned into riots complete with violence against police and civilians as well as acts of looting, property damage and arson.