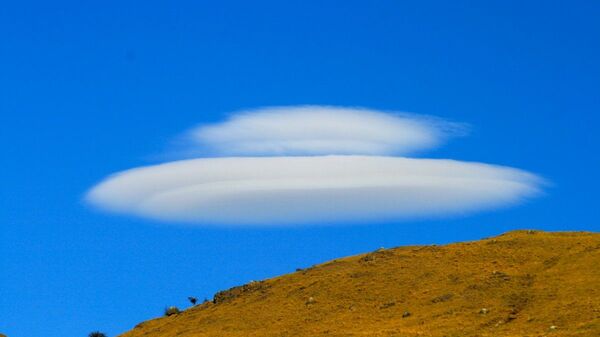 CC0 / /
Subscribe
International
India
Africa
Andrei Dergalin
All materialsWrite to the author
While one blogger and UFO hunting enthusiast went on to speculate about why the alleged UFO might've taken an interest in a wind farm, one social media user suggested that the flying object might've actually had terrestrial origins.

Yet another report of an alleged UFO sighting has emerged from the United States, where an eyewitness managed to film a peculiar sight in the vicinity of Palm Springs, California.

Uploaded on "Terry's Theories UFO Sightings", a YouTube channel, the video, which was apparently recorded on 14 October and whose veracity couldn't be immediately confirmed, features what looks like some kind of white object slowly gliding in the air above wind turbines.

Taking note of this development, prolific UFO hunter Scott C. Waring wrote in his blog that while the eyewitness "at first believes it to be a cloud and then soon realised it was probably a UFO".

"UFOs do have a high interest in human technology and wind farms are the newest in free energy harvesting to make a cleaner planet. UFOs have been seen before around wind farms and one even crashed into a windmill many years back," he mused.

Waring also argued that the alleged UFO got "caught very close to Area 51, Nellis AFB and the famous Extraterrestrial Highway" which he described as a "UFO hotspot".

At least one social media user who commented on the vid, however, suggested that the object in question "might be a TARS blimp out of Arizona, visiting Riverside, CA", adding that they've seen a "white blimp" while at their "place" in Palm Desert, "which is nearby".