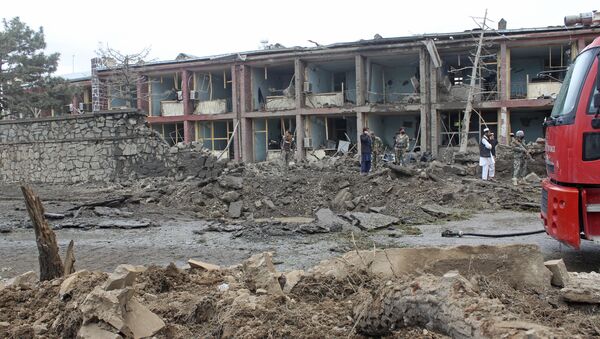 © AFP 2021 / STR
Subscribe
KABUL (Sputnik) - The United States’ move to resume "excessive" airstrikes in Afghanistan amid clashes in the southern province of Helmand presents a grave violation of the Doha agreement, the Taliban said on Sunday.

"According to the Doha agreement, the American forces are prohibited from carrying out airstrikes or targeting anyone in areas other than combat zones or during active fighting. However, over the past few days, drone and other fighter aircrafts have carried out attacks during day and night times in Nahr Siraj, Khushkawa, Babaji, Malgir and Band-e-Barq areas of Greshk and various areas of Sangin, Marjah, Nawa and Nad Ali districts. Moreover, airstrikes have also been carried out in Farah and other provinces which are all a direct and clear violation of the Doha agreement," the radical movement said.

According to the Taliban, the US is "engaging in provocative actions and bombing non-combat zones."

"All responsibility and consequences from continuation of such actions shall fall squarely on the shoulders of the American side," they warned.

Afghanistan has witnessed a surge in violence since the beginning of Kabul-Taliban talks in Qatar in late September. The Taliban, in particular, launched an offensive in Helmand last weekend, pushing back Afghan security forces in some areas.

Against this backdrop, US forces in Afghanistan have hit the Taliban with airstrikes to support government forces, saying that the "targeted" attacks are consistent with February's peace deal, unlike the movement's offensive.

000000
Popular comments
Problem solved. Afghanistan already sent all drugs to US as ordered.

Barros
18 October 2020, 19:05 GMT2
000000
US DOD going off the reservation because they are going to be forced out of Afghanistan soon by their boss and they will lose a big source of income as they leave all those opium fields behind.