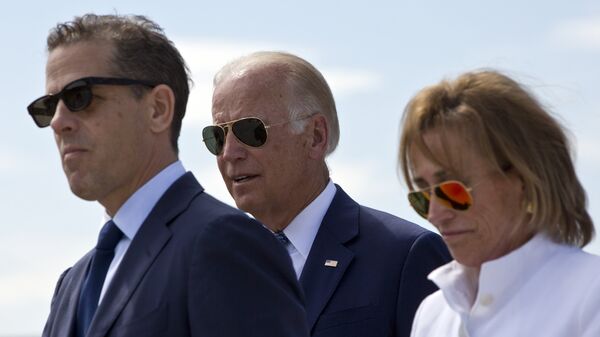 Ekaterina Blinova
All materialsWrite to the author
The New York Post dropped a bomb on Hunter Biden's business deals and the alleged role of his father Joe Biden, following the GOP's September report calling out the potentially criminal financial transactions of the ex-vice president son. US journalist Max Parry has discussed the disclosure and FBI Director Christopher Wray's apparent inaction.

The Post's first bombshell report – published on 14 October and almost immediately censored by Twitter – unveiled "smoking gun emails" alleging that then-Vice President Joe Biden met with an executive from the Ukrainian gas firm Burisma less than a year before Ukraine's then-General Prosecutor Viktor Shokin was fired at Joe's request. According to Shokin's affidavit, he was investigating Burisma's supposed fraud at that time. Joe Biden has repeatedly denied any involvement in his son's business deals.

"What's telling is that the Biden camp has not disputed the authenticity of the emails, which if genuine directly contradict what the former vice-president has maintained, which is that he had no involvement in his son's company," says US independent journalist Max Parry. "Examining the emails, it is clear Burisma expresses to Hunter Biden that they wanted the Obama administration to help get the energy firm out of its legal issues ("close down any cases, pursuits against") with the Ukrainian government, which included a money laundering case."

The Post's allegations fit into the Republican version of events, according to which Burisma used Hunter Biden as a shield to protect its business from the new Ukrainian authorities and international scrutiny after then-Vice President Joe Biden was put in charge of Ukraine affairs by President Barack Obama.

On 12 May 2014, Burisma announced the addition of Hunter Biden to the board of directors despite the fact he had zero experience in the energy sector.

On the same day, Vadym Pozharskyi, an adviser to the board of Burisma, allegedly sent an email asking Hunter and his longtime business partner Devon Archer for "advice on how [they] could use [their] influence" to prevent the energy holding and "N.Z." (which appears to be a reference to Burisma owner Mykola Zlochevsky) from encountering "politically motivated" pressure from the new Kiev authorities, who came to power after the February 2014 coup.

Earlier, in April 2014, the UK froze $23 million belonging to Burisma's owner at Ukraine's request. However, in December 2014 – when Hunter Biden was on the gas firm's board, Zlochevsky purportedly paid a $7 billion bribe to the Ukrainian Prosecutor General Office (PGO) to "have the case against him closed and his $23 million in assets frozen in the UK unfrozen", according to the GOP report.

The alleged scheme apparently worked, as the UK’s Serious Fraud Office (SFO) unblocked Zlochevsky's accounts on 21 January 2015. As a SFO spokesperson explained to the Guardian in May 2015, the assets were unfrozen because the SFO "was not provided with the evidence by authorities in the Ukraine necessary to keep this restraint order in place". 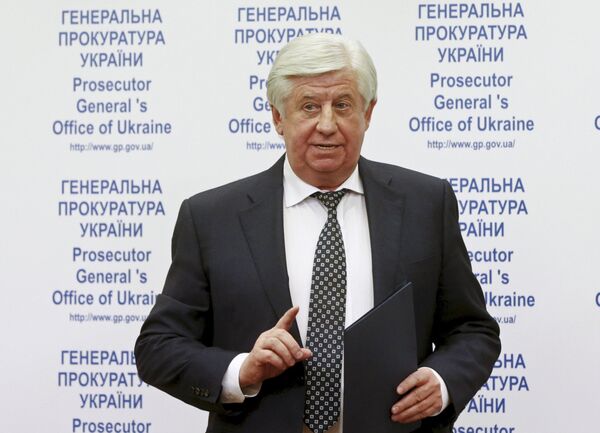 Meanwhile, Viktor Shokin who was appointed Prosecutor General of Ukraine on 10 February 2015, reportedly started to look into Burisma and Hunter Biden's role in its operations. Still, according to Shokin's affidavit, he was forced to resign in February 2016 after then-Vice President Biden warned then-Ukrainian President Petro Poroshenko in December 2015 that Ukraine would not get a much-needed $1 billion loan unless the prosecutor general was sacked.

Tapes of alleged Biden-Poroshenko conversations, which were leaked in May 2019 and now are being examined by Ukrainian investigators, shed some light on the supposed discussion showing that Poroshenko did not view Shokin as "corrupt", which was the official explanation for his ouster.

"There is no direct proof that Biden acted upon his son's pledges to the company, but the conflict of interest could not be clearer. Hunter Biden was appointed to Burisma despite no experience in Ukraine or the energy sector so that his father, then assigned to ironically head up an anti-corruption drive in the country by Obama, would pressure the Ukrainian government to fire the prosecutor investigating the natural gas giant," Parry says, adding that more revelations are likely to come.

One of the emails released by The Post indicates that Joe Biden could be well-aware of Burisma's problems since he met with the firm's executive in person well before December 2015. On 17 April 2015, a letter allegedly sent by Pozharskyi to Hunter Biden read: "Thank you for inviting me to DC and giving an opportunity to meet your father and spent [sic] some time together".

Besides this, Burisma enjoyed unusual benefits within the Obama administration, Parry notes, despite many in the US State Department regarding Zlochevsky's business deals as suspicious at that time.

"The emails reveal that the public relations firm Blue Star Strategies, which was hired by Burisma to lobby the administration on Ukraine, sent Hunter Biden a memo that they were taking part in a conference call hosted by the Obama White House regarding US policy in Ukraine just prior to Biden's diplomatic visit to the country," the journalist points out.

The GOP report concerning Hunter Biden's business deals highlights that the Obama administration downplayed American officials' concerns over the potential conflict of interest, while Joe Biden avoided denouncing Zlochevsky as a "corrupt" businessman on many occasions. 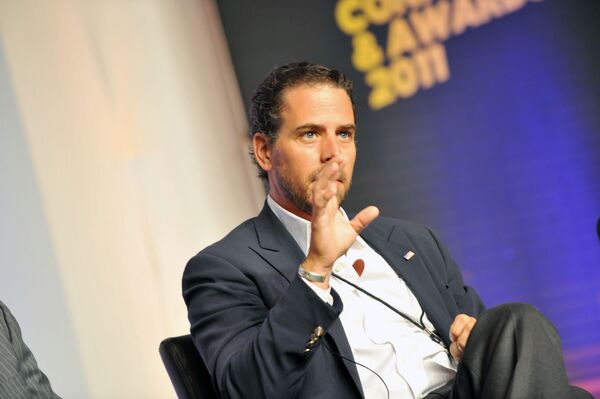 After the first report, The Post unveiled the second batch of "smoking gun emails" alleging that what appeared to be separate instances of "nepotism" in Ukraine was an apparent "pay-to-play" scheme with Hunter Biden serving as a frontman for the Biden family.

​According to one of the emails concerning the ex-vice president son's dealings with Chinese businessman Ye Jianming, the former chairman of CEFC in 2017, and his associate Gongwen Dong, Hunter Biden got $30 million over three years for "introduction" services only, after his father stepped down.

Hunter was also opened to new lucrative deals in China which were "interesting to [him] and [his] family". Yet another letter allegedly discussed the distribution of monies between Hunter Biden's associates and mentioned "10 held by H [apparently, Hunter] for the big guy". As Rudy Guiliani, who provided the drive in question to The Post, believes the "big guy" could be Joe Biden.

Meanwhile, on 16 October, Breitbart announced that it had obtained emails from Bevan Cooney, a one-time Hunter Biden and Devon Archer business associate. Cooney, who is currently serving a prison sentence over a 2016 bond fraud scheme, reached out to American author Peter Schweizer and authorised him to release his emails. According to the media outlet, this is the first Hunter Biden's associate who "has publicly confirmed Hunter’s trading on his father’s influence".

Given that in 2018 Devon Archer was also charged with fraud with his conviction being reinstated on 8 October 2020 by the US federal court the question arises whether he could follow in Cooney's footsteps.

"Archer will likely receive a lengthy sentence for fraud", deems Parry. "However, his legal team may be hoping that Biden wins the election where a new Department of Justice could mean a different outcome for his case. Whether not he chooses to divulge any secrets to help himself in light of these email revelations may depend on the outcome of the election".

Although the massive leak which occurred less than three weeks before the elections has all the earmarks of a great scandal, the left-leaning mainstream media and FBI Director Christopher Wray appear to be unimpressed.

Always remember that the FBI had Hunters hard drive all during the impeachment sham. Why didn’t they divulge the contents then?

​"It raises questions about whether they deliberately ignored damaging information because they favour Biden in the election", says the US journalist. "The FBI has not explained whether they even examined the laptop which they received late last year. However, it is also a legitimate question whether they withheld the emails during the impeachment trial because they thought it would have helped Trump. They've had the material for almost a full year, so we need to know what they know and when they know it".